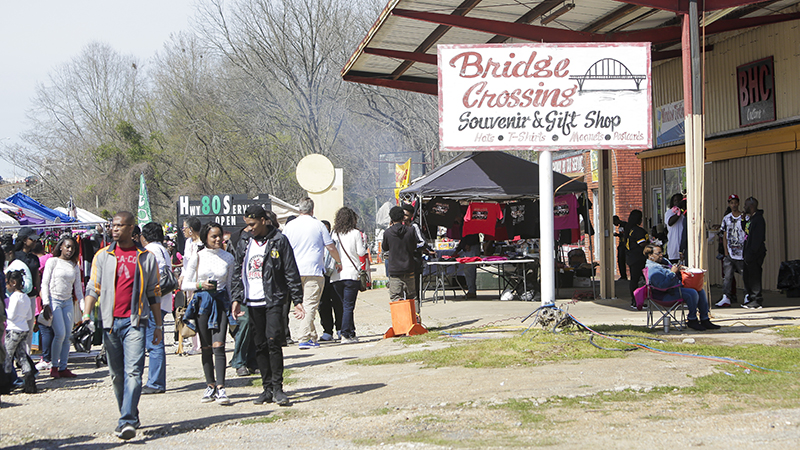 The Selma City Council and the Jubilee organizers reviewed their agreement over where vendors are allowed to setup for the Jubilee.

The Selma City Council did not vote Tuesday night on an agreement with Bridge Crossing Jubilee organizers on the setup for the street festival after a “misunderstanding.”

This year’s street festival has been moved back to Water Avenue, which is its original location. It was moved to private property on the Selmont side of the Edmund Pettus Bridge last year after a dispute over city fees. The city has accepted $5,000 from organizers to help pay for city services this year after the city agreed to help cover the cost.

During the meeting, Councilwoman Miah Jackson, who represents Ward 3, read aloud the terms she thought organizers had agreed to.

Jackson, along with Council President Corey Bowie, met with Sam Walker, one of the organizers of the event, on Monday at Selma City Hall to discuss plans. All three of them even walked down to Water Avenue to make sure they were all on one accord.

Part of that agreement was that no food vendors would be allowed to set up on the west side of Water Avenue, which is in Ward 3, due to recently completed construction on the sidewalks from Broad Street down to Church Street on the right-hand side of the road.

The agreement would allow vendors selling clothing and other items on the west side of Water Avenue, as long as none of them were set up on the sidewalks.

Other terms of the agreement included grease traps and tarps for food vendors, fencing along the street and newly paved sidewalk, parking spots and access for Times-Journal employees working during the hours of the festival, a list of all vendors and to establish a committee to work with organizers in the future.

The agreement also called for areas with direct access to the riverfront to be fenced off. All fencing will be provided by the Jubilee, according to the agreement.

Jackson said she thought they had reached an agreement, but Walker said Tuesday night he was under a different assumption concerning the sidewalks on the other side of the street of the west side.

Walker said he thought he was only agreeing not to allow vendors to set up on the new sidewalks. He thought the old sidewalks on the other side would be available to vendors.

“The misunderstanding that we had was that because the old side of Water Avenue never changed in front of the old museum and the Selma Times,” Walker said. “I didn’t think we’d have to do anything to change on that side, so we would have food vendors going down that side because that’s what we’ve always had.”

Walker said Wednesday the Jubilee would not allow any vendors on the new sidewalks. Those vendors will be set up in the road and will be backed up to the curb.

“We’re going to keep folks off of that,” Walker said. He added food vendors will be set up on the other side of Water Avenue.

Walker said everything else in the agreement will stand as is.

There has been much discussion and concern throughout the community and amongst businesses about where the festival will be set up and what will be required for vendors, who have left behind major messes in year’s past.

“As you know we recently spent between $800,000 and $1 million on the streetscape on Water Avenue. It won’t make it through this Jubilee with grease and all of the garbage,” said David Hurlbut, owner of the Harmony Club on Water Avenue, during Tuesday night’s meeting.

“All of the grass that was planted has an irrigation systems underneath them. There’s no way you can put tent spikes down and get away with keeping the grass nice, all the shrubberies and all the green space.”

The agreement will not allow vendors to set up on the new construction or in the green space areas. Hurlbut asked the council to consider moving the festival to the east side of Water Avenue, but that was not done.

He also mentioned moving it to the Riverfront Park, which he said would be the “perfect” venue due to the panoramic view of the Edmund Pettus Bridge.

The park also has an amphitheater and multiple entrances. Hurlbut said he did not understand why the venue was not getting any use.

Jackson’s agreement also forms a committee to hold several meetings throughout the year to prevent any issues for future Jubilees.

She said the first meeting would be scheduled no later than May 10 and proposed meetings in September and January.

The Jubilee begins tonight with a mass meeting at Tabernacle Baptist Church. The street festival will be Saturday.

Selma woman on road to recovery after near-fatal wreck