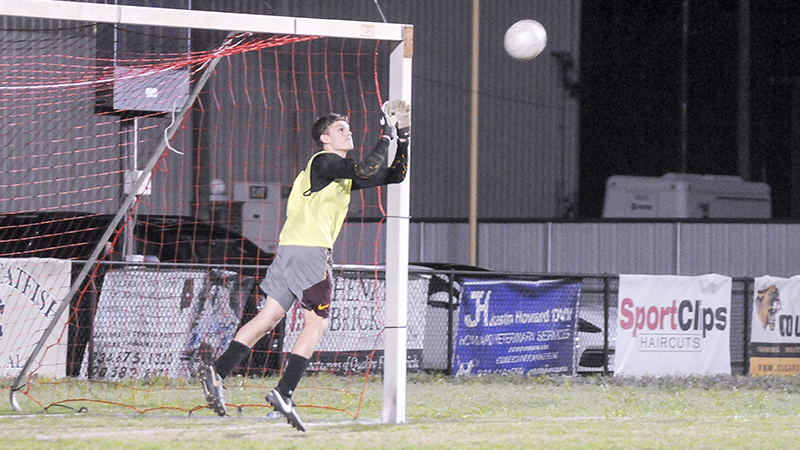 “We played scoreless for 60 minutes against the state champs,” Morgan Academy head soccer coach Jay Minter said. “Eight of my 14 guys are junior high boys, so I couldn’t be more proud of them.”

Autauga was shooting early and often against the Senators from every vantage point. They were shooting from both corners and from distance as well, but were unable to find the back of the net for the majority of the game. Several missed chances kept the Senators in the game as the time ticked away.

Not only did Morgan’s defense do a good job keeping Autauga’s attack at bay, but the Senators eighth grade goal keeper, Wilks Chittom made save after save for his team.

Despite the constant attack by Autauga’s offense, Chittom chased down balls and deflected many of their shots. Even when he was out of position, the goal posts saved the Senators from a few line drive shots by Autauga.

“This is his fourth game ever, and third as a goalie,” Minter said. “He’s going to be a monster in 2-3 years.”

However, with 20 minutes left to play, Chittom’s luck finally ran out when a deflected save rebounded to an Autauga player who made the easy shot to get a 1-0 lead over the Senators. A minute later, he was put into a lose-lose situation when Autauga was awarded a penalty kick for a foul in the box. Chittom went right, but the ball went left and into the goal.

“We held them and held them, but finally surrendered a goal,” Minter said. “That one goal, and we kind of lost our edge.”

Autauga’s offensive strategy was to be in attack mode all night and it eventually paid off.

The Senators had a few chances on goal, but were unable to finish. Their best chance to score came with 34:24 left in the second half when Ansh Shah passed the ball through to team captain Daniel Portwood on a break towards the goal. Portwood gave it his best shot, but the Autauga keeper was able to handle the catch for a save.

The Senators put up a strong effort, but ultimately couldn’t match the aggressive scoring strategy that Autauga brought.

“They learned a lot about themselves tonight,” Minter said. “They learned they could stay out there with anybody. It’s not about the win or the loss tonight. We can learn a lot from this and build for the rest of the season.”

The Morgan Academy girls team, however, avoided being shutout on its home field Tuesday night against Autauga when Jordan Harrison scored on a penalty kick with 2:28 left in the match. 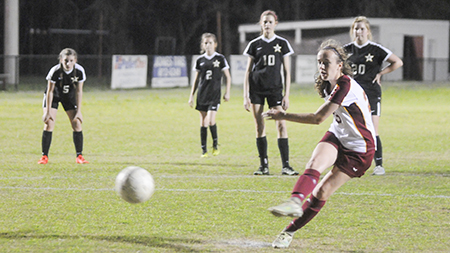 Morgan Academy’s Jordan Harrison scores on a penalty kick with 2:28 left in the game.

“I was glad to have a finished goal at the end,” Morgan Academy’s head girls soccer coach Brooke Lee said. “It’s a tough game. Autauga is always competitive. I was proud to finish with a goal and finish the game strong.”

Despite the late goal, the Lady Senators still lost the match 6-1 for their third loss of the season. Autauga scored three goals in each half, while the Lady Senators had limited opportunities on the offensive end. Early in the second half, Harrison had an uncontested shot at the goal, but she fired the shot right into the hands of the opposing keeper.

The Lady Senators are a young group, and they are still coming together as a unit. The girls are playing with enthusiasm as they try to improve game by game.

“It’s been a good learning year,” Lee said. “And for me as well, as a first-year coach. Nothing but room for improvement.”