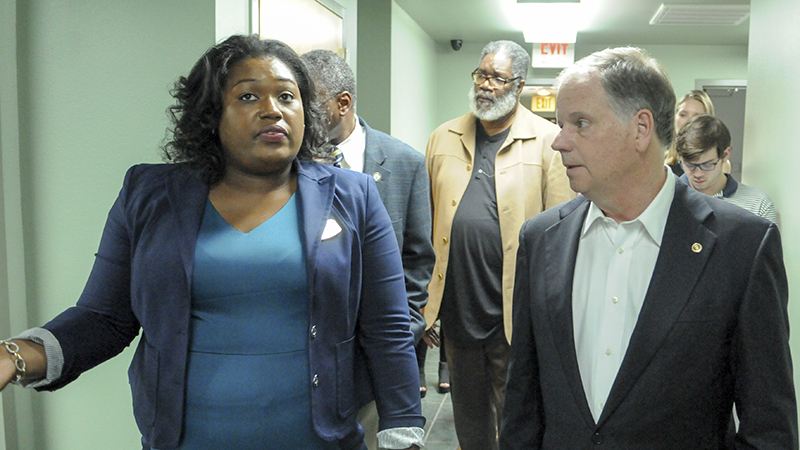 Keshee Smith, CEO of the Rural Health Medical Program, gives. U.S. Sen. Doug Jones a tour Tuesday of the program’s future home. Jones was in Selma as part of a state-wide tour. He also spoke with Mayor Darrio Melton and other community leaders. (Blake Deshazo | Times-Journal)

United States Sen. Doug Jones took time out of his schedule Tuesday to visit two rural health facilities, with one located in Selma.

The Rural Health Medical Program, located at 101 Park Place, and staff members gave Jones a tour of their brand-new facility that has not yet opened to the public.

Jones was not able to attend the groundbreaking ceremony for the facility, but wanted to assure rural communities that they have a friend in Washington, D.C.

“People living in rural areas need to know they have a senator who will work for them and is not just a campaign slogan,” Jones said. “I came back to make sure I hear from folks and see what’s going on, and I can take those messages back with me to Washington.”

Jones, a Democrat, was sworn into office on Jan. 3 after defeating Republican candidate Roy Moore in a special election for the senate seat vacated by now U.S. Attorney General Jeff Sessions.

Almost two months later, Jones is still putting forth his best effort to show Alabamians statewide that he is dedicated to serving them.

Keshee Smith led the tour around the facility explaining to Jones what each room and area will be used for once the center opens. She used the time she had face-to-face with Jones to show off the various services offered by the medical facility, which Jones marveled as a “miniature hospital.” The tour also gave Smith time to continue a productive dialogue with the senator about health disparities in rural Alabama areas that need national attention.

Jones pledged commitment to improving the health conditions for those living in low-income or rural areas, and is looking forward to continue his work in D.C. With the national political conversation changing, Jones sees it as an opportunity to impact his constituents.

The current senate work period (Feb. 20-24) is the first full work period available for Jones since being sworn in, and he is looking to take full advantage. Despite other issues consistently coming to the forefront, Jones has made sure to stay focused on the health and economic needs of his people.

“The thing about Washington, D.C. is sometimes the issues come to you. The first six weeks were about budget and immigration. I think after the Parkland shootings last week that we are going to see more involving guns and school safety. These are issues that you can’t foresee, necessarily. They just come to you,” Jones said.

“But, we are going to continue working through the appropriations and budget process to make sure community health centers have funding. Infrastructure will be an important part of that. I am hoping we can get some money for this entire area for health centers, roads, bridges and rural broadband.”

Smith has also expressed concern over rural health disparities to the U.S. representative of Alabama’s 7th Congressional District, U.S. Rep. Terri Sewell, and has voiced her desire for Smith, Sewell and Jones to all continue working together moving forward to improve the standard health conditions of thousands of Alabamians living in rural areas.

Furthermore, Smith is pleased to have someone in Washington she believes she can trust and is looking out for their best interest. While not all politicians are tuned-in to their constituents, Smith thinks Jones is genuine in his concerns.

“I do believe he is someone people can trust. He shows up and asks what he can do to help. Listening is the first step,” Smith said. “He cares about Selma. He came today asking about the budget and what we need, and that means the world.”

When returning to Washington, Jones aspires to have a better gauge on the needs of his constituents and hopes his time spent in Selma will impact the community for the better.

Along with touring Rural Health’s new medical center, Jones also took time to speak with Selma Mayor Darrio Melton, who referred to Jones as an “old friend” and even spent time on Jones’ campaign for senator.

Sitting down to discuss the needs of the city, Melton remarked how beneficial it could be for the city to have multiple reliable government contacts at the national level with Jones and Sewell.

“We were able to sit down and talk about different ways to improve Selma, such as with infrastructure,” Melton said. “He is definitely somebody I can trust and it is good to have a senator and a member of congress I can have access to.”

After visiting Selma, speaking to the mayor and seeing all Rural Health has to offer, Jones was immediately off to Centreville to gain further understanding of the health and economic needs of the rural area.

The Rural Health Medical Program is on track to open its doors in July, according to Smith.