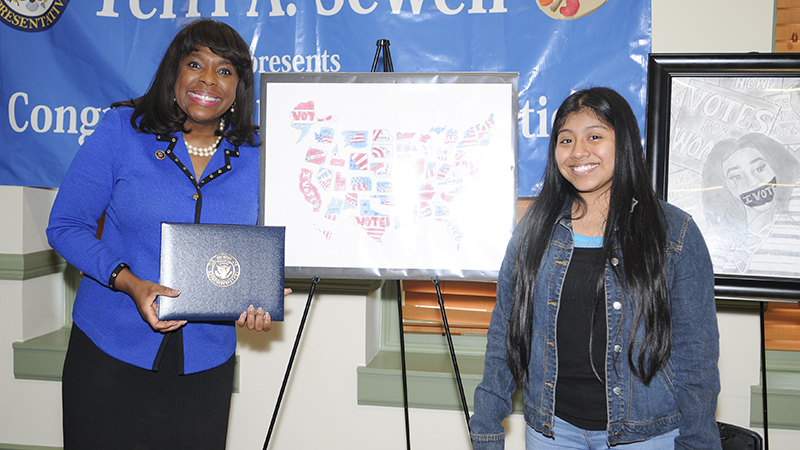 Congresswoman Terri Sewell announced the winners of the Congressional Art Competition for the 7th Congressional District at the Selma Interpretive Center Saturday afternoon.

This year the contest featured artwork from 60 students in five different counties.

“You’re all winners. I think that it is so important that we inspire the next generation of artists,” Sewell said. “I think that the members of Congress fought so much about art in schools, especially in high school, elementary and junior high school, that that’s why we passed a law 45 years ago to have this art competition.”

The theme of this year’s competition was “Voting Rights Today in the 7th Congressional District,” and the winner received free round-trip plane tickets for two to Washington, D.C. to attend a reception honoring winners from each district.

Each member of Congress holds a competition for their district. The winner’s artwork will be displayed in the halls of the U.S. Capitol for the next year.

The reception is moved to a different city each year, and this year’s was held in Selma to go with the theme.

Shanna King, a constituent services representative in Sewell’s Montgomery office, said the competition is designed to encourage high school students to be artistic.

“A lot of our students don’t have art teachers because of cutbacks, so they are self-taught. This is a great way for them to perfect their talent,” King said.

The competition was judged by Sandy Greene and Jo Pate, as well as Ronald McDowell.