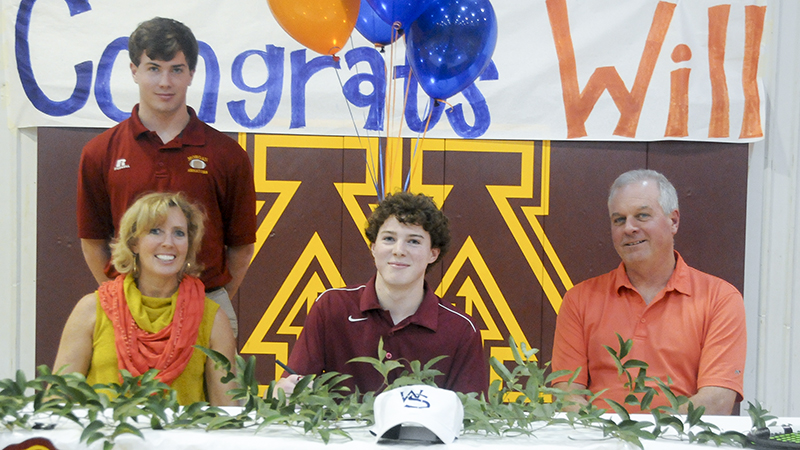 Will Brackin signed his letter of intent to play tennis at Wallace State Community College Hanceville on Thursday afternoon accompannied by his brother; Sam Brackin; mother; Bradford Brackin and his father Lane Brackin.

Morgan Academy senior Will Brackin, 17, signed his letter of intent to attend Wallace State Community College Hanceville on Thursday afternoon with friends and family in the bleachers of the gym.

Last February, when Brackin was ranked No. 28 in the state of Alabama in the boys 16 division by the United States Tennis Association, he told the Times-Journal that hoped to continue to play tennis in college.

In 2017, Brackin and the Morgan Academy Senators tennis team won the 2017 AISA state championship. Outside of the AISA season, Brackin has competed and won several tennis tournaments. Sometimes playing in up to three tournaments a month.

Now, his hard work has paid off. His hope of becoming a collegiate tennis player has become a reality with the stroke of a pen.

“I feel great,” he said. “It’s good to know that all the hard work paid off. It’s a good feeling.”

In addition to his classmates, Brackin’s family and friends also came to celebrate at his signing party. His parents, Lane and Bradford Brackin, were excited to see their son make his dream come true.

Bradford encouraged Will to play tennis instead of football and basketball when he was in sixth grade. At the time, Brackin thought it was an awful idea, he told the Times-Journal. But as it turns out, mom was right and he fell in love with the sport.

“It’s just an amazing finish to a long journey and goal that [Will] has had,” Bradford said. “We’re super thrilled. We think it’s a very good fit for him. We’re just really excited that he’s living out a dream.”

Will sat in between his parents as he signed his letter of intent. They were just as excited as Will was to make the signing official.

“It’s very uplifting, and we’re proud of him,” Lane said. “He’s worked hard. When he was younger, he had a goal to play college tennis and he’s worked hard at it daily. It’s encouraging and fulfilling to see your son have a goal and work hard to get it.”

The WCCS Hanceville tennis program is in its second year. The team won its conference tournament this past season, and head coach Tony Franklin believes that adding Brackin will strengthen the team.

“Will is going to fit in our program very well,” he said. “He’s going to make our lineup deeper. Last year, we did win our conference tournament. This year we’re stronger at the bottom [of the lineup] than we were last year, and with the signees we’ve got coming in in the fall, we’re going to be even deeper next year.”

Baxter Stinson, Morgan Academy’s head tennis coach, said that it was fun playing a part in helping Will make it to the next level. He’s confident that Brackin will put in the work to compete at the next level.

“I’m really proud of Will for putting in the effort and the work to get to the next level,” Stinson said. “He really has a mental aptitude for the game, and that has really made the difference for him. He has a high tennis IQ, and that’s what put him over the top.”