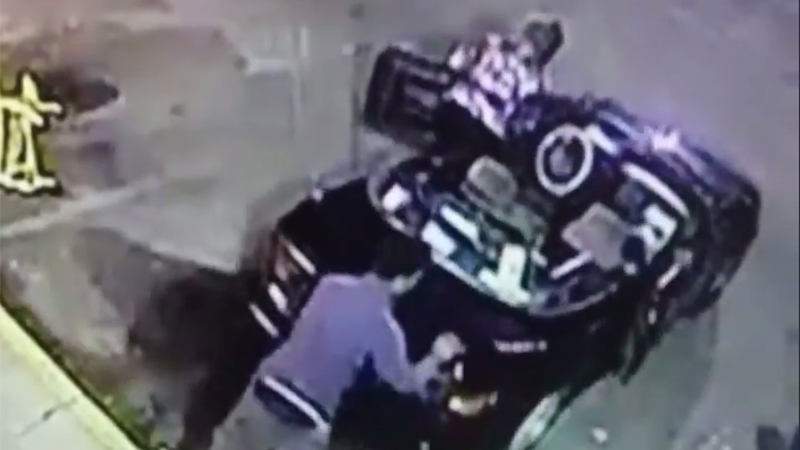 Three shoplifting suspects at the Valley Grande Dollar General were arrested on Feb. 4 after their getaway car broke down. (Robin Hale | Facebook)

A Facebook video of a botched shoplifting attempt at the Dollar General store in Valley Grande earlier this month has become a local laughingstock.

The video, posted by the store’s assistant manager Robin Hale, had more than 40,000 views as of Friday afternoon and over 1,000 shares.

Dollar General shoplifters can’t get getaway car to crank from The Selma Times-Journal on Vimeo.

The video shows three suspects exiting the store, one carrying a basket and two others with a shopping cart. The suspect with the basket climbs into the front passenger seat, while the other two pick the cart up and dump the stolen merchandise into the back seat of the vehicle.

The two suspects then toss the cart to the side and get in the car. The driver, which has been identified by the Dallas County Sheriff’s Department as 27-year-old Jerrica Jackson, of Selma, tries to crank the car, but it won’t start.

After a continuous effort to crank the car, all three suspects finally jump out of the car and start pushing it across the parking lot.

Once an officer arrived on scene, all three suspects were arrested and charged with fourth-degree theft of property. The other two suspects have been identified as 39-year-old Sharonary Ellis and 24-year-old Patrick Woods, both of Selma.

Capt. Mike Granthum with the Dallas County Sheriff’s Department said the incident happened on Feb. 4 between 6-6:15 p.m. on the 4200 block of Alabama Highway 22 East.

“Basically, what you have is they went into the store, stole items, got back to the car and the car broke down,” Granthum said.

Granthum said the reporting deputy saw two of the suspects walking away from the vehicle and the driver still inside.

“As the reporting officer approached, a call of a theft at the adjacent business, which is Dollar General, was put out,” Granthum said. “The reporting deputy approached and observed a substantial number of items of the type sold by Dollar General strewn throughout the car.”

Granthum said the items totaled $299.80 and were returned to the store. He said Jackson was taken into custody after a brief struggle. She was also charged with resisting arrest.

The other two suspects, who took off running from the car, were apprehended and brought back to the store, where they were identified as the suspects. All three were booked into the Dallas County Jail.