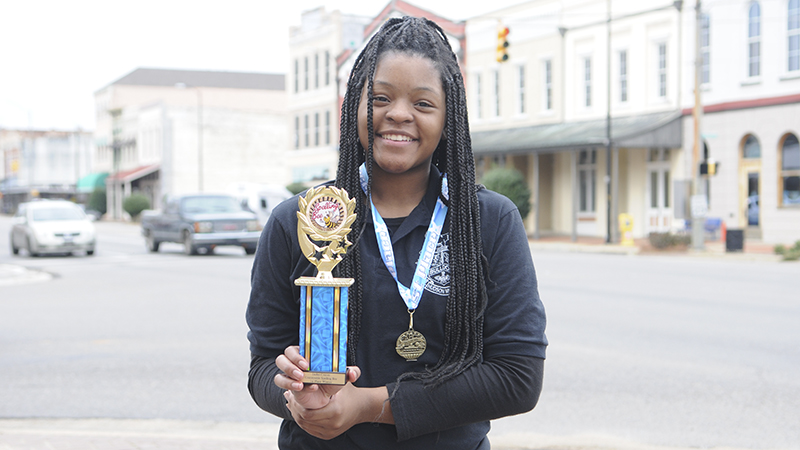 Aniya Mitchell, a 7th grader at R.B. Hudson Middle School, won the Dallas County Spelling Bee and will represent the county in Alabaster in March in the state-wide competition. (Blake Deshaz0 | Times-Journal)

A student at R.B. Hudson will be representing Dallas County at the state-level competition of the spelling bee after defeating her competition at the local level at the Selma-Dallas County Public Library.

Seventh grader Aniya Mitchell will compete against third to eighth-grade student representatives from the other 66 Alabama counties at the state meeting in Alabaster.

A top performer over the last few years, this year is the second time Aniya has won the Dallas County level of the Competition. She won the first time in 2015.

Her consistent success with her academia makes her parents proud of what she has been able to achieve.

“I am very proud of not only her accomplishments, but also the type of person she is,” Columbus Mitchell, Aniya’s father, said. “She’s a person that cares about other people. She balances everything, remains humble and that is what I love about her. Her mother deserves credit, too. She helped her with her studies.”

If Mitchell wins at the state level, she will move on to represent Alabama in national competitions.

Registration is at 10 a.m. and the spelling bee begins at noon.