Simmons’ 3-pointers lead Keith to next round 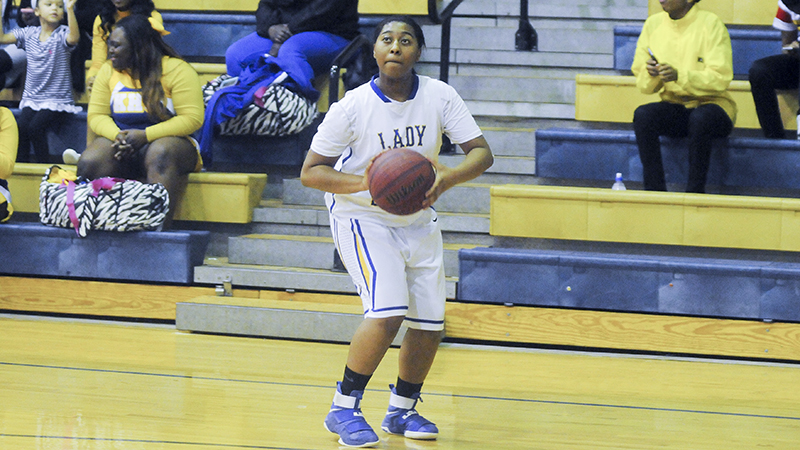 Keith’s Jakyra Simmons made four 3-pointers in the Lady Bears’ 70-30 win over the Verbena Red Devils in the sub-regional game on Monday night in Orrville. The Lady Bears will advance to the regional tournament at Alabama State University in Montgomery on Friday, Feb. 16.

The Keith High School Lady Bears (15-8) defeated the Verbena Red Devils 70-30 on Monday night in Orrville, and secured their spot in the regional tournament at Alabama State University in Montgomery.

“I just wanted to get everyone some playing time and work on some things that we possibly could use down the road,” Keith head coach Cecil Williams said. “Most of all, we just wanted to build confidence and get the girls time to get shots in a game situation. It was an overall good experience for everybody.”

Keith guard Jakyra Simmons opened the game with a 3-pointer from the right-wing, and the flood gates opened from then on. The Lady Bears were scoring through their offense and in transition throughout the game.

The Red Devils weren’t able to keep up with the Lady Bears scoring pace.

“We figured out they only had two ball-handlers, so we used the press to get some turnovers and that worked out well in the first half,” Williams said. “We played our zone the rest of the game on the way out.”

When the girls weren’t on a fast break, their passing led to open shots that they were able to capitalize on.

Simmons finished the game with four 3-pointers and led the team with 18 points. Moore found most of her points in the paint and scored 14 for the Lady Bears.

“Right now, it’s a great time for [Simmons] to start peaking and getting her shot together during the playoffs,” Williams said. “That’s a big help for us.”

At the end of the first quarter, Keith had a 28-8 lead. Williams pulled his starting five off the floor. But the second unit still outscored the Red Devils 12-8 in the second quarter to go up 40-17 at halftime.

The starters came back in the third quarter and put up another 22 points to further separate themselves from Verbena. The Lady Bears had a comfortable 62-20 lead to start the final quarter of the game.

The Red Devils finally outscored Keith 10-8 in the fourth quarter, but time was up and Keith was the team moving on to the next round.

The Lady Bears advanced to the region tournament, and will play on Friday, Feb. 16 at ASU in Montgomery.

According to Williams, the approach doesn’t change as they move up through the playoffs.

“Just play it the same as always,” he said. “It’s still a game. We just have to make sure to take time to take care of the ball and execute when we have it. We’ve been there a couple of years, so we understand being there. We have the experience, so we just have to follow through.”

The Selma High Lady Saints lost 91-41 to Hillcrest Tuscaloosa on Monday night in the sub-regional game. Lady Saints senior guard Kynadra Lewis scored 17 points in the game. The season has ended for the Selma High girls.