Pandora Club dances the night away at annual ball 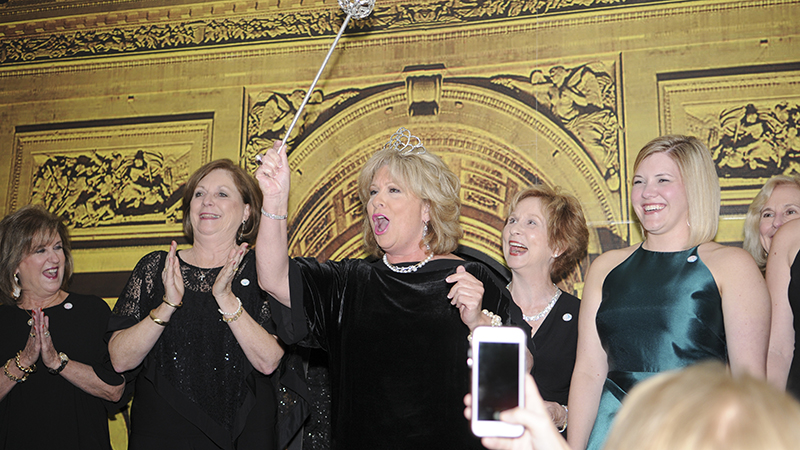 Frances Turner was crowned Pandora for 2018 Friday night at the club’s annual dance at the Selma Country Club. Turner will serve as the club’s president this year. (Blake Deshazo | Times-Journal)

Members of the Pandora Club and their guests danced the night away at the Selma County Club Friday night for its annual ball.

Each year, the dance alternates between a formal and a costume party, and this year’s theme was “An Evening in Paris.”

“It’s so much fun because so many of us go in a lot of different directions throughout the year. It’s the one time we can all come together and enjoy friends that we haven’t seen recently,” said Frances Turner. “It’s a really fun gathering of friends.”

A member of the club writes a poem anonymously for the ball’s invitation every year explaining the theme.

“Let Pandora be your guide, on a beautiful Seine River ride, you will see lovely Notre Dame Cathedral on your right, on the left, the Eiffel Tower all lit up in the night,” the poem reads in part.

“We’ll take a bus to see Versailles Palace and Chateau, the gardens are beautiful, you know.”

The dance kicked off with a social hour at 7 p.m., followed by lead out at 8 p.m., where new club officers were recognized, and new members were welcomed.

Turner was crowned Pandora Friday night by 2016 Pandora Gladys Elliot and will serve as the club’s president for 2018-2019.

New members that were welcomed into the club are Claire Mosley, Taylor Namburu, Kaylee Peak and Brady Rives.

The Pandora Club is one of the oldest social clubs in Selma, which dates back to the 1950s. The club consists of more than 100 members.

“There are multi-generations in the group too. There are grandmothers and daughters, grandchildren. Pandora is a big family,” Turner said.

The country club was decorated with different landmarks in Paris, such as the Eiffel Tower and Arc de Triomphe. The Fountain City Players band performed, as club members and their guests danced and mingled.