Saints come up short in title game, advance to sub-regional 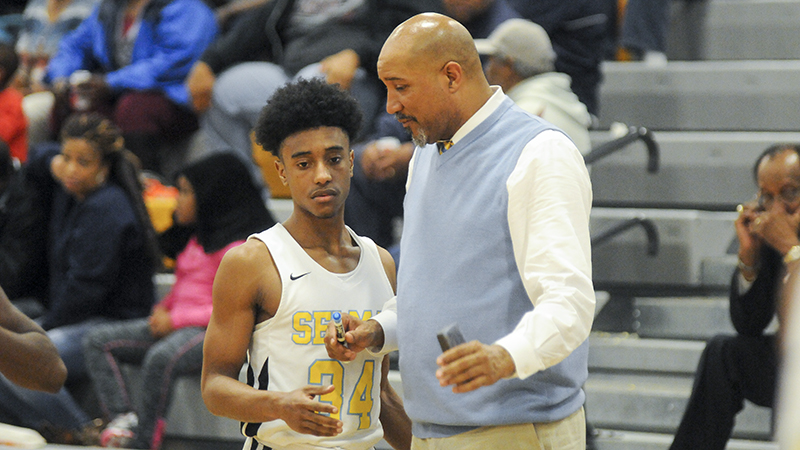 A technical foul with 15 seconds left in the game gave the Selma High Saints a chance to force overtime in the Class 6A Area5 title game Friday night in their home gym.

Saints senior guard Korbyn Kelly made both free throws to cut Chilton County’s lead down to 58-55.

The Saints inbounded the ball to Michael Harris. He pump-faked his defender before taking one dribble step to his left. He took the open 3-pointer, but the ball bounced off the rim.

Chilton County went to shoot free throws to seal the game, but missed both of them and gave the Saints one last opportunity.

Unfortunately, an errant pass went out of bounds and the top seeded Saints lost the area tournament title game 60-55 to Chilton County.

“Blown opportunities,” Selma High head coach Ronald Lane said. “We just gave them too many second chance points, putting guys on the line and not capitalizing when we had the chance. We got what we wanted out of the press for the most part, but they were just making big plays.”

The Saints started the game with a high level of intensity. The defensive pressure was forcing turnovers, which led to fast breaks and easy points. The Saints held Chilton County to just four points in the first quarter.

In the second quarter, Chilton County found their offense and was able to get back into the game. The Saints shot 45 percent from the free throw line in the first half, which prevented them from maintaining their lead.

To start the third quarter, Lane made an adjustment to slow down the offense. The Saints had possession of the ball for the first two minutes of the third quarter, before ultimately turning the ball over. Chilton County went down the court and tied the game with a 3-pointer after two passes.

“Our kids just didn’t show the patience,” Lane said. “The patience to execute in this type of environment just wasn’t there.”

Chilton took its first lead of the game with 3:30 left in the third quarter, and then the teams started trading scoring runs.

Selma sat back in a zone defense, but their aggressiveness in the passing lanes left them vulnerable at the rim.

“[Davis] is a guy who’s been dynamic ever since he’s been here,” Lane said. “He’s a sophomore that came up from the junior varsity, and we pulled him up because we knew what he could do and we thought he could contribute on the varsity level. He stepped up and made some big plays when we needed them.”

Unfortunately, the Saints’ rally was undone by too many turnovers and missed opportunities. They watched as Chilton County and their fans celebrated on their home floor.

The season isn’t over for the Saints. Selma will be on the road for the sub-regional game on Tuesday, Feb. 13.

“I think we’ll be headed to Paul Bryant, the defending 6A state champions,” Lane said. “I think we can play with anybody if we make plays. We’re going to have to be more consistent that what we’ve been in the last couple ball games.”