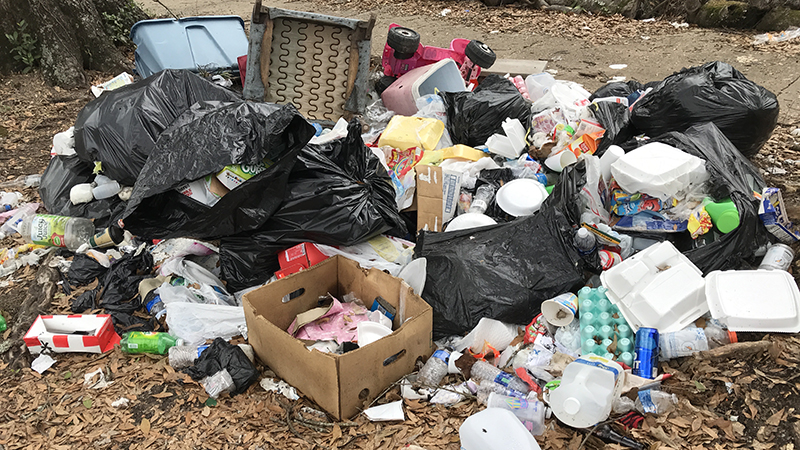 Illegal dump sites like this one near the intersection of Water Avenue and Lapsley Street have become an issue all across the city of Selma. (Adam Dodson | Times-Journal)

After providing residents with adjustment time and a fair warning of the consequences, the garbage problem in Selma remains.

According to city residents and members of Selma’s Old Town Association, garbage remains littered on the streets of Water Avenue, Lapsley Street, King Street, Alabama Avenue and others due to lack of enforcement, lack of residential care and lack of education.

Not only have Selma residents been slacking on paying for their garbage service, but “guest garbage” is causing additional issues. People from different parts of the city will drive around dumping garbage in front of neighbors’ homes. People from outside the city have been seen coming into town, dumping their garbage, and then leaving town again.

The problem is not something new to Selma. Sea Coast Disposal, who is currently contracted with the city for garbage disposal, only recently came into town after the old disposal company, Advanced Disposal, decided to stop operations in partnership with the city.

According Greg Bjelke, former councilman of Ward 3, where many Old Town houses are located, this problem started before Sea Coast or Advanced Disposal.

“It has evolved from normal trash to boxes to construction material,” Bjelke said. “I have seen people not from here come into town to dump their trash because they know they can get away with it. The problem will continue until the city ordinance gets some teeth.”

The ordinance Bjelke refers to calls for the appropriate disposal of garbage. However, the original ordinance had issues making citizens keep up with their garbage disposal bill, therefore lacking its “teeth.”

One way that was considered to force people to pay was adding the garbage bill to another bill, such as water. For example, if a resident does not have their garbage can or won’t pay for the service, their water bill would take a penalty or the service shut off. However, there was no legal way to implement this.

The new ordinance empowers the city government to collect noncompliance fees rising as high as $200 with a misdemeanor charge for refusing or failing to keep up with garbage disposal services. This does not include court costs, and Sea Coast is not guaranteed to forgive a tenant’s past-due bill, possibly throwing in additional financial penalties.

Sea Coast bills for $60 for three months, or a discounted rate for the whole year.

The garbage must be put in the garbage can given to each individual.

After giving the residents what he believes has been ample time to adjust, Selma City Code Enforcement Director Sean VanDiver thinks the time to give enforcement some teeth is right now.

“We are aggressively attacking the garbage problem. We have been playing nice. No more warnings for this,” VanDiver said. “We will send you to court if you do not comply. The only way we’re going to clean this city up is by forcing them to get cans. We don’t want to bog the court system down, but we have to do something to prevent this environmental issue from becoming a health issue.”

According to VanDiver, stricter enforcement of the city ordinance is yielding positive results. Over the past three weeks, they have issued 55 citations for failure to keep up with garbage or dumping garbage elsewhere. This in turn has gotten some residents to take action.

“We have been receiving more calls about people wanting trash cans. Residents can either pay the $200 fine or get the service for $20 a month,” VanDiver said. “Residents must maintain their garbage service or they are in violation.”

The issue with garbage all boils down to one common denominator: money. Some residents take issue with having to pay $60 for a service they may not want. According to Old Town Association member Candi Duncan, the money-saving, garbage-dodging tactics have evolved in ways she never imagined.

“People are renting places but refusing to pay the rent, let alone the garbage service bill. It is like they have figured out how long they can stay after receiving an eviction notice. Then, they do not take the trash with them,” Duncan said. “I do not believe it is fair that some residents pay $60 for this service while others have not had to pay anything.”

As of mid-December, there were just under 900 residents who were not paying their garbage service. While this does not mean all 900 of these residents are dumping their garbage on the streets, it also does not take into account the garbage left behind by those without a Selma address.

Other ways have been suggested by Selma residents to additionally improve the garbage situation. Bjelke thinks the city should purchase four or five long dumpsters that individuals could drop their trash off without paying a fee, increasing motivation to use this method.

Gracie Powell, owner of multiple homes in the historic area, believes that the city government should threaten to penalize tenant’s leases for noncompliance.

However, not all view the situation as dire. There are plenty of areas in Selma where there is no garbage to be found. William Powell, son of Gracie and involved in Old Town operations, believes the part of his neighborhood has not seen this issue.

“Our current residents have done fine. I honestly have not noticed an issue where I live,” William said. “We have had one garbage can that has been stolen, but other than that, it has been fine.”

Despite the complaints over the garbage situation in Selma, VanDiver and other city government members remain confident that the problem can be solved.