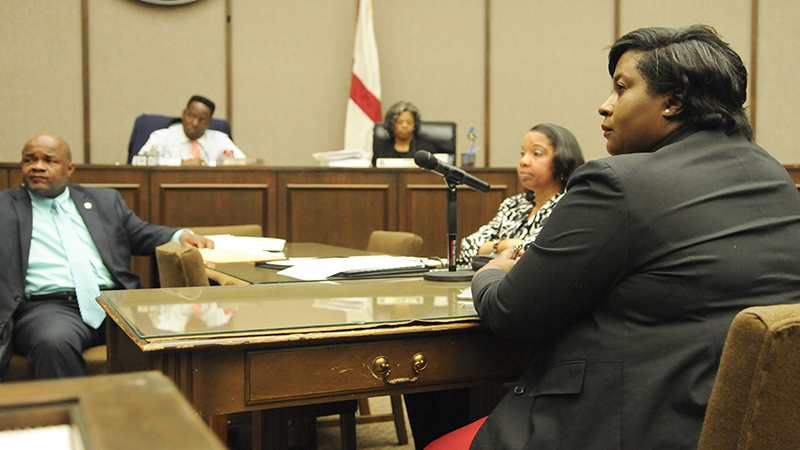 Selma City Treasurer Ronita Wade was reinstated Tuesday after a vote by the council. Wednesday, she was locked out of her office when she returned to work. (Blake Deshazo | Times-Journal)

City treasurer Ronita Wade has been locked out of her office and her computer was confiscated, according to her attorney Julian McPhillips.

Wade, who was fired twice by Selma Mayor Darrio Melton in 2017, returned to work Wednesday morning after the Selma City Council voted Tuesday to reinstate her during a due process hearing.

“They’re trying to bully her again and threaten and intimidate her like she’s done something wrong,” McPhillips said. “She’s been locked out of her office, and I think this mayor is inviting a contempt of court citation once we file something or an impeachment. I think that’s the way it’s headed.”

Wade said she cannot do her job. Melton said there is a possible criminal investigation related to Wade’s time as treasurer.

Melton could not confirm if there was an active investigation and would not go into any details on any allegations against Wade.

“It’s serious to the point that the chief of police is involved,” Melton said.

Selma Police Chief Spencer Collier spoke to council members during Wade’s hearing Tuesday. He said information was referred to the Selma Police Department regarding Wade. He said his department is not conducting an investigation, but the information was referred to an outside unnamed agency. It is unclear why the Selma Police Department confiscated the computers Wednesday if they are not conducting an investigation.

Melton said he does not agree with the council’s decision to reinstate Wade.

“The council, that’s their will. While I don’t agree with their will, they have the power to appoint that position. It is my hope that the truth comes to light,” he said.

McPhillips suggested the council take action through circuit court if Wade is terminated again. Wade said Wednesday she has not been told if she has been placed on administrative leave again or if she will be terminated for a third time.

“He’s acting like a dictator out of a Latin American country. He won’t comply with legitimate orders from the council,” McPhillips said.