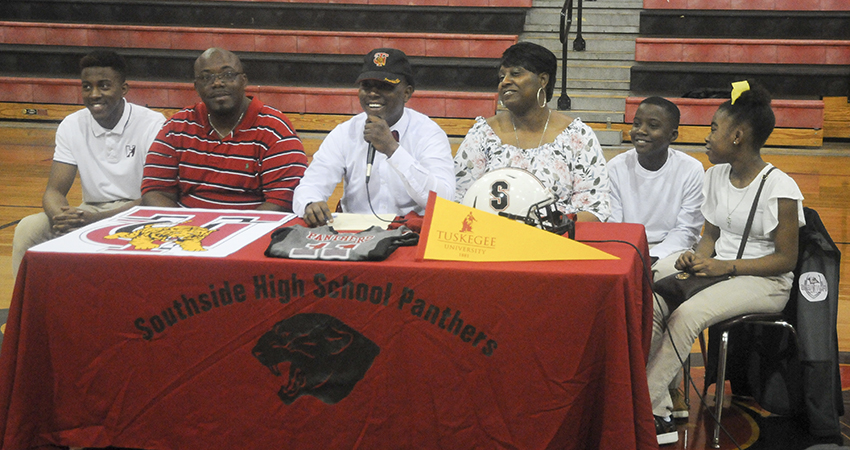 Edward Moore Jr., surrounded by his family, signed his letter of intent and accepted a walk-on offer to attend Tuskegee University.

Southside High School and Keith High School each had a player take the next step in their football and academic careers on National Signing Day on Wednesday.

Southside’s Edward Moore Jr. signed his letter of intent to accept a walk-on offer to continue his education and football career at Tuskegee University in Tuskegee.

“First, I want to thank God because without him none of this would be possible,” Moore said. “This is like a dream come true. I’m overwhelmed right now.”

Moore’s teammates and fellow seniors came to the Southside gym Wednesday morning to support their classmate as he prepared to officially announce his decision. At the table decorated with his old No. 11 Southside jersey and Tuskegee hat, Moore was surrounded by his family at mid-court.

“It’s fun seeing all these faces and people I grew up with since pre-K,” Moore said. “Seeing how much they support me, I love them all.”

Tuskegee University was Moore’s dream school because of its engineering program, and he’s excited that he gets an opportunity to pursue his dream and study what he’s passionate about. 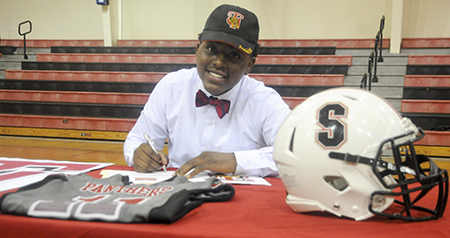 “Tuskegee was important to me because of the academics,” he said. “Their engineering program is like one of the top in the world, so that’s what I’m really focusing on. When I got my walk-on offer, it really put the cake on top of it. It means the world to me right now.”

Since it was just a walk-on offer, Moore is going to have to earn his playing time and any potential additional assistance through his own hard work.

As a four-year starting varsity defensive back who bounced back from a burn accident to play in an optional senior bowl, hard work is nothing new to Moore.

“I’m going to have to work hard to earn my spot,” he said. “To me, that’s like nothing. Coach Flowers was telling me to just be myself. Continue to do what I’m doing now, and everything will work out on its own.”

Flowers has coached E.J. and rattled off several reasons why he was proud to see one of his players take the next step in a positive direction.

“E.J.’s been a four-year starter for me,” Flowers said. “Great character and he’s a great young man. I hate to lose EJ, because he was a leader of the defense, physical and smart. To see him go to his dream school makes me feel blessed. It feels good as a coach to see your kids having success.”

“I’m very proud that my son has the opportunity to go to college because it’s something he’s always wanted to do,” Moore Sr. said. “The last three or four years, that’s all he talked about. He wanted to go to Tuskegee and play ball. I’m just proud of him because he’s been through a lot in the last couple months, and I’m glad that he was able to come back stronger.”

Katrina is even happier that her son will be in-state and not too far away. 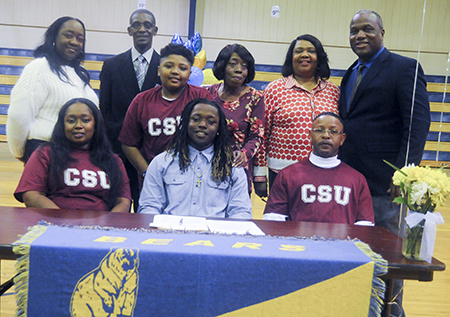 Later that afternoon in Orrville, Keith’s Ty’Quarius “Boogaloo” Murray signed his letter of intent and accepted a full scholarship to play football and attend Central State University in Wilberforce, Ohio.

“Today meant a lot,” Murray said. “It showed me that I could do stuff that I never thought I’d be able to do.”

Murray’s signing party was kicked off by the Keith cheerleaders and followed up by his highlight reel for his classmates and family members to watch.

“It means a lot to know that I’ve got people behind me pushing me to do better and keep striving for greatness,” Murray said.

CSU was so interested in Murray after seeing his film, that they called him back immediately.

“As a matter of fact, we were still on the phone with them when they called us right back,” he said. “I’m excited to play fullback and get another chance on the field.”

CSU is 621 miles away from Keith High School. Even though he’ll be far away, Murray’s parents were still excited at the opportunity for their son.

“[My parents] feel good,” Murray said. “They don’t have to pay any money.”

Not only were Anthony and Antionette Richardson excited about the full-ride, but also to watch a new opportunity open up for their son. 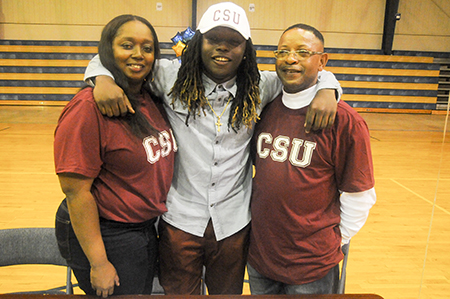 “It’s probably one of the best feelings in my life,” Antionette said. “I’m really proud of Boogaloo. I’m his No. 1 fan.”

Anthony took a more measured approach, but still very proud of his son.

“I’m overwhelmed about the situation and I hope that he succeeds,” Anthony said. “I told him not to get a big head when he gets up there.”

Keith football head coach Harry Crum emphasized how special it was for him and the Orrville community to see Murray earn and accept this scholarship.

“It means to me that we’re doing something right, and it’s not always about wins and losses,” he said. “We’re trying to prepare these young men to go on to the next level not just athletically, but academically and socially also.”

Murray said that coach Crum would always remind him to stay focused when they discussed his future.

After a brief statement from Murray thanking God, his family and supporters, Murray signed his letter and committed to CSU.