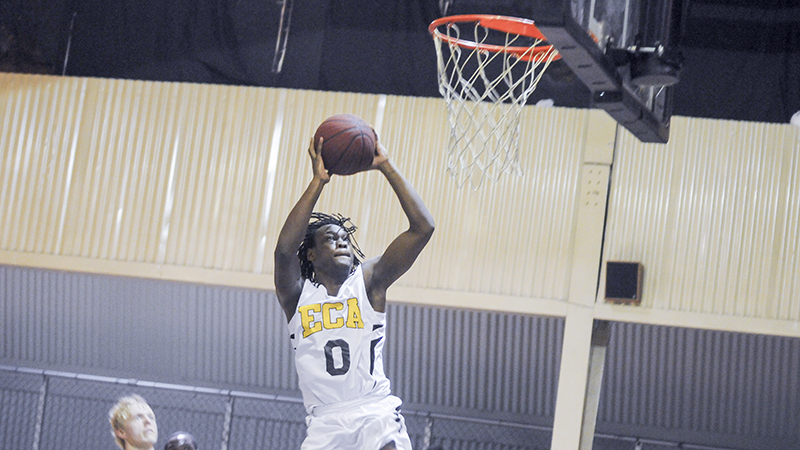 Ellwood Christian's Loveless Craig attacks the basket in the Eagles' 83-59 win over Isabella on Tuesday night.

The Ellwood Christian Eagles boys basketball team defeated the Isabella Mustangs 83-59 in the semi-final round of the Class 1A Area5 area tournament on Tuesday night.

“You can’t lose the first game,” Ellwood head coach Willie Shears said. “We played everybody. Let everyone get some minutes, because you never know who you’ll need to go later on down the stretch.”

The Eagles were undefeated in area games during the regular season, so they were able to host the tournament as its No.1 seed.

In their previous two games against Isabella, Ellwood won 105-35 and 110-39. The semi-final game was closer, but the Eagles were still too much for Isabella to handle.

“The approach was to win and have no one get hurt,” Shears said. “It wasn’t about how many points we were going to put up on the board. At this point in the season, you just want to win and keep everybody healthy.”

Ellwood had the height and athleticism advantage over Isabella. Loveless Craig, Justin Bufford and Ja’Mel Phillips were easily able to work their way inside Isabella’s defense. They were highly active on the glass as well. Cleaning up missed shots and getting second, third and sometimes four extra chance opportunities beneath the basket.

Craig led the team with 18 points, while Bufford scored 13 and Phillips had 12.

The perimeter shots were falling as well. Malachi Washington made three 3-pointers in the first half alone, and Joseph Mahone made one in the third quarter.

Isabella, however, did score more points than they had in either of their previous two matchups against the Eagles. They were dependent on the three-point shot, because they had limited opportunities to get past Ellwood’s defense. Isabella made 10 3-pointers in the game. Mustangs guard Isaac Martin made five of them himself, and led his team with 22 points.

Early in the third quarter, Bufford twisted his ankle after getting fouled on a drive to the basket. He went straight to the bench after the injury and didn’t return to the game. Bufford is one of the team’s leading rebounders this season, but Shears expects him to be back and ready to play on Friday.

“From what I was told by the trainer, he’s going to be good,” Shears said. “He tweaked his ankle, so we put ice on it. Justin Bufford is a tough kid. He’ll be ready to go on Friday.”

In the other semi-final game, Maplesville defeated Autaugaville. The Eagles and the Red Devils will play for the area tournament championship on Friday, Feb. 9. Both teams will advance to the sub-regional after the game, but the winner gets to host a home game.

“This is a new season,” Shears said. “In this new season, we’re 1-0. For Maplesville, we’re going to have to come out, try and get the win and make sure nobody gets hurt. That’s the focus right now.”

The Dallas County Hornets boys team defeated Marbury 82-60 at Calera High School on Tuesday night in the Class 5A Area6 semi-final game. Chance Lee led the team with 24 points and Kendall Thomas scored 18. The Hornets have advances to the area tournament championship game, which will be played at Calera High School at 7 p.m. on Friday, Feb. 9.