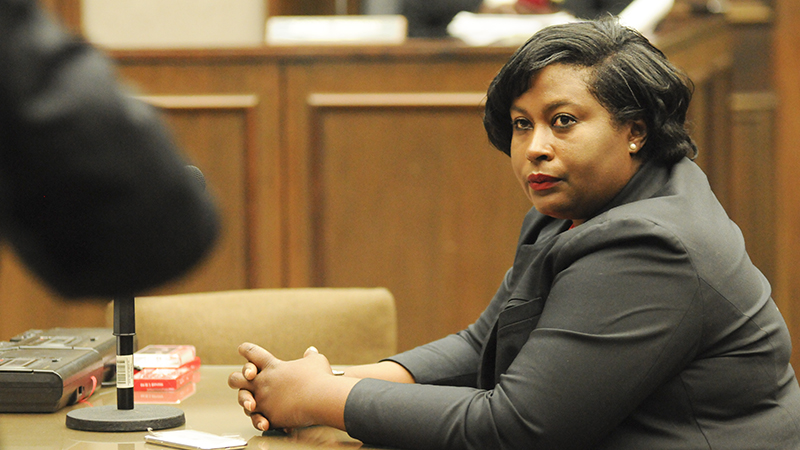 Ronita Wade listens to her attorney speak to the Selma City Council Tuesday afternoon during a due process hearing. Wade was reinstated as city treasurer after a vote by the council. (Blake Deshazo | Times-Journal)

After being fired twice by Selma Mayor Darrio Melton in 2017, Ronita Wade has been reinstated as city treasurer.

“I’m grateful that they trust in me and believe in me and know that I will continue to hold the ethical responsibility of the public,” Wade said after the decision.

The Wade saga began in September when Melton placed her on administrative leave. Melton said Wade was insubordinate and tried to undermine him during a Sept. 19 budget hearing. She was then fired on Sept. 27.

She was reinstated 10 days later after the council voted to bring her back on board. Two days later, she returned to work and was placed on administrative leave. Wade remained on leave until Dec. 22 when Melton sent a certified letter of termination to her attorney, Julian McPhillips. The letter said Wade was terminated for her accounting and management practices, which allegedly led to a series of missteps, miscalculations and inappropriate activities.

Melton was not present during Tuesday’s due process hearing. Instead, human resources director Jim Herring presented the mayor’s charges against Wade.

“I’ve been asked to inform you that the city is not able to provide any information concerning Ms. Wade at this time, as there may be a criminal investigation related to her time as treasurer,” Herring told the council. “The mayor’s office will update you as soon as more information available.”

He then directed further questions to Selma Police Chief Spencer Collier. Collier said his department is not conducting an investigation of Wade. He said allegations have been referred to an outside agency.

Collier did not name the agency.

McPhillips then made a presentation to the council about his client’s background and why he believes Wade was fired. McPhillips said it was due to a power struggle for control of the city’s finances and Wade not giving Melton financial information while he was campaigning for office.

Wade was then given an opportunity to state her case for reinstatement. Wade said she respected the mayor’s authority to present the budget and never intended to create and present an entirely different budget than he did to the council during the Sept. 19 budget hearing.

“I’m not worried the least iota about any criminal investigation … I can assure every one of you that,” Wade told the council. “All I have did [sic] is try to maintain the public, my integrity and the city’s public trust and make sure that I follow procedures as they apply legally and ethically.”

After more than two and half hours of discussion, council members finally voted.

Carl Bowline and Johnny Leashore voted to sustain Wade’s termination. Councilwoman Susan Youngblood was not present for the meeting. A motion to back pay Wade to Dec. 22 was also passed.

Randolph proposed defunding Ollie Davison and Sean VanDiver’s positions. Randolph was visibly upset when the council did not show its support. He stomped out of the council chamber for a moment and said council members are “scared of the mayor.”

McPhillips suggest the council take the matter to circuit court if Melton were to fire Wade again and even entertained the idea of the impeachment process. McPhillips said the reinstatement is effective immediately.