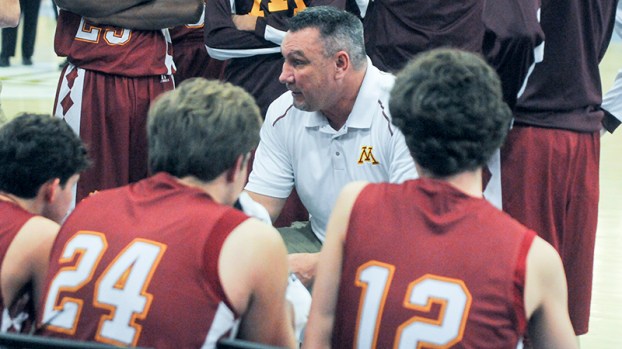 Morgan Academy head coach Mark Knight goes over in-game adjustments with his team during a timeout. The Senators lost 63-44 to Lakeside in the Final Four of the AISA state tournament in Montgomery.

The Morgan Academy Senators lost 63-44 to Lakeside in the AISA state tournament Final Four on Saturday at the Multiplex in Montgomery.

“I enjoyed working with them. I think we went a little further than most people thought we would.”

The Senators ended their season with a 14-7 record. The boys put together a strong year that started with a six-game winning streak and ended in the state tournament.

“They built on last year and coach Knight did a fantastic job with the guys,” Morgan Academy athletic director Josh Thacker said. “They had a lot of support from the community and fans. It’s been a long time since Morgan’s been to the Final Four, and it’s been a great year for Morgan athletically. We’re super proud of those guys and all the work that they put in.”

The team wasn’t alone either. Morgan Academy fans and cheerleaders made the trip to Montgomery to cheer on their team. The student section was packed and the Morgan bleachers were filled to the top as well. The Ball Heads and cheerleaders stayed with the team the whole game, and did their best to support the team from the stands. 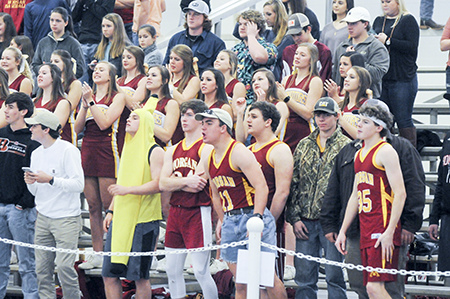 The Ball Heads, Morgan Academy’s student fan section, and the Morgan Academy cheerleaders rooted for the Senators until the clock ran out.

“It was like this all year,” Thacker said. “It’s a Saturday and every body could’ve just as easily been doing what they wanted to, but they’re here supporting our young men and women. That’s big for us.”

The Senators struggled to score early, which allowed Lakeside to establish a comfortable lead early. Lakeside also had a 6-foot-7 center in Jonathan Norfus, who made it difficult for Morgan to score in the paint.

“When we started, we wanted to go inside,” Knight said. “But we were going inside and not getting anything, so I went to our smaller lineup.”

Perimeter shooting has been a weakness for the Senators this season, and it continued to be an issue against Lakeside when they couldn’t work the ball inside.

In the first quarter, Morgan was only able to make two field goals and a free throw. Morgan’s Hayden Bruner blocked Norfus’ shot and Ed Williams finished the fast break with a layup. Jay Creech made the only other first quarter shot for the Senators with a mid-range baseline jumper.

The second quarter offense was better for the Senators, but Lakeside was able to keep their distance with consistent shooting. The Senators switched to a trap defense to try and force some turnovers. It worked for a stretch, but Lakeside was athletic enough to break through and create two-on-one situations at the rim.

“Lakeside was a little more athletic than we were, and we didn’t make shots,” Knight said. “You’ve got to hit shots to play with those guys.”

Costly turnovers and missed free throws hindered Morgan’s rally attempts. After a brief run, a steal or errant pass would halt any momentum the Senators had gained. Morgan guard Dione Allen picked up his fourth foul with just under three-minutes left in the third quarter, and had to leave the game until he was needed again.

Morgan trailed 39-27 to start the fourth quarter, and made their final run to close the gap. They scored 17 points in their best offensive stretch, but it wasn’t enough to match Lakeside’s 24-point frame.

“We did have a couple of good runs,” Knight said. “I think we cut it to seven early in the fourth quarter, but we couldn’t get over the hump.”

Lady Saints win on buzzer-beater in overtime, Harris gets win No. 399