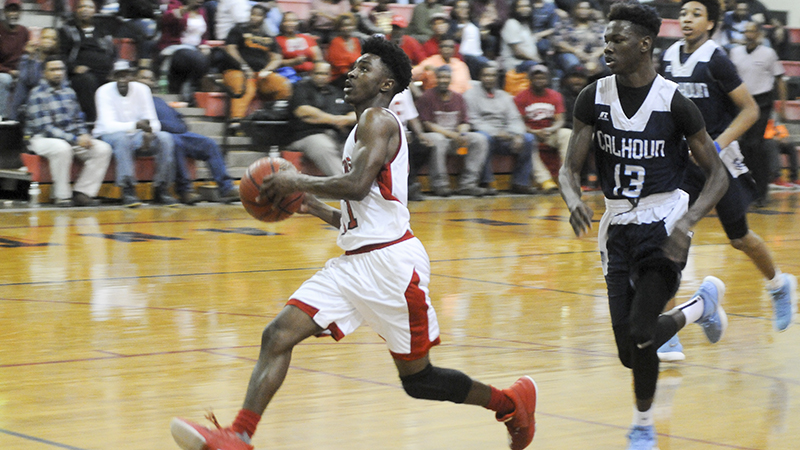 Southside’s Keishon Williams goes up for a fast break layup in the Panthers 62-54 win over Calhoun on Thursday night.

The Southside Panthers capped off Senior Night with a 62-54 win over the Calhoun Tigers on Thursday night.

The game was tied 52-52 with 3:18 left in the game. Southside guard Keishon Williams reached down to try and rub out the cramp that locked up his leg on the Panthers last possession.

Instead of going to the floor and stopping play, Williams limped his way back onto defense and managed to steal the ball away from the Calhoun guard. Unable to take the fast break himself, Williams passed the ball to a streaking Keshawn Arrington, whose layup started the 10-2 run to end the game.

“Keishon is so competitive,” Panthers head coach Lenord Jones said. “He started cramping, but he still pushed through because he’s our point guard and floor general. I was impressed with that.”

The game started with both teams trading baskets. Calhoun was able to make some easy layups early off of turnovers, and had a 14-10 lead at the end of the first quarter.

However, the Panthers dominated the second quarter and outscored Calhoun 21-7. Southside went on a 2:47 run in the second quarter that put Calhoun in a deep whole. Panthers guard Rickey Webster started it off with a corner three and Arrington sunk a 3-pointer from the top of the key on the next possession. Derrick Griffin turned a steal into a fast break dunk. Arrington made another 3-pointer and a free throw. Then, Derrick dropped another corner three on Calhoun before they were able to get a free throw to stop the run.

At halftime, the Panthers went into the locker room with a 31-21 lead.

The Tigers came out in the second half and made a stronger effort to get the ball inside. The adjustment worked and Southside had trouble defending the rim and rebounding against Calhoun.

“Calhoun made an adjustment in the second half and they decided to start attacking the basket,” Jones said. “We decided to double up on the man that was driving the ball, and that’s how we stopped them from getting the easy layups.”

At the end of the third quarter, the Panthers had a 46-35 lead, but the game was changing. Less than two minutes into the fourth quarter and the Tigers tied the game 46-46.

“I told the team I thought the effort was poor,” he said. “We came out flat at the beginning of the game and never recovered. We had a lot more energy in the second half, but just didn’t have enough to finish the ball game.”

The Tigers, in fact, outscored Southside in the final quarter 19-16, but the Panthers defense forced a drought in the final three minutes that helped them complete the win.

“The defense pulled through,” Jones said. “They stepped up, because Calhoun came back on us.”