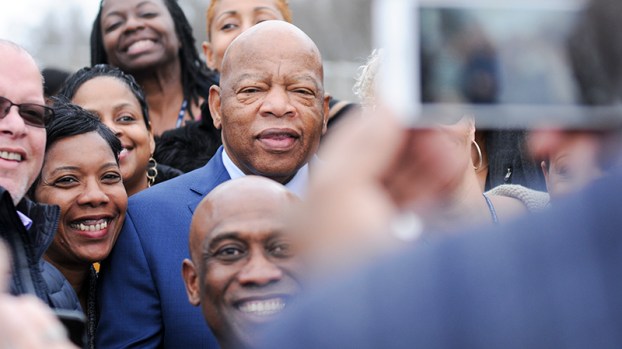 Congressman John Lewis poses for a photo with tourists at the foot of the Edmund Pettus Bridge Thursday. Lewis, who led the Bloody Sunday march in 1965, was in Selma to teach members of the Jewish Federations of North America about the voting rights movement. (Blake Deshazo | Times-Journal)

Congressman John Lewis was in Selma Thursday giving members of the Jewish Federations of North America (JFNA) a history lesson on the voting rights movement.

The group stopped in Selma Thursday as part of a civil rights tour that included Birmingham and Montgomery. They visited several historic sites in Selma, including Brown Chapel and the Edmund Pettus Bridge.

“Outside of personal things like the birth of children, this is one of the great moments of my life to be able to walk across this bridge with Congressman Lewis and the past two days in Birmingham and Montgomery and now Selma,” said Brian Ratner, of member of JFNA. “The history and what it means to this country is hard to put into words.” Congressman John Lewis poses for a photo on the Edmund Pettus Bridge with members of the Jewish Federations of North America. The group stopped in Selma Thursday as part of a civil rights trip. (Blake Deshazo | Times-Journal)

The JFNA represents 148 different Jewish federations and more than 300 network communities. The federations collectively are among the top 10 charities on the continent, according to its website.

Susannah Heschel, the daughter of Rabbi Abraham Joshua Heschel, who marched alongside Dr. Martin Luther King Jr. in 1965, was among the visitors from the JFNA.

Heschel said she has been to Selma on several occasions, and each time it is a moving experience because of the connection between the Civil Rights Movement and the Jewish community.

“What happened on Bloody Sunday was horrifying, and it has a Jewish link because the night that happened the television was showing the movie Judgement in Nuremberg about the Holocaust, and then we saw what was happening right here in Selma,” she said.

“Immediately, of course, everybody identified the two with what the Nazis did and what the Alabama State Troopers were doing and Jim Clark, the sheriff.”

Her father marched arm in arm with Dr. King in the third and successful march from Selma to Montgomery. Rabbi Heschel is pictured in historic photos from the march.

“Selma is historic the way Concord, Massachusetts or Lexington [is], but it’s more than that because there is something holy about this place,” she said.

“You feel when you come here that you’re walking on holy ground because this is the first place that I know of in history where people came together, rabbis, ministers, priests, nuns, different religions.”

One of the stops on their visit to Selma was at Temple Mishkan Israel, where members of the federations mingled with members of the Jewish community in Selma, such as Ronnie Leet.

“We talked about the Jewish influence to Selma in the past. We’ve had a very strong Jewish congregation here in Selma up until recent years,” Leet said.

As the group completed its walk across the Edmund Pettus Bridge, Ratner said he takes away one thing from the trip.

Teacher of the Year candidates announced

By: Adam Dodson Four Selma teachers will represent the city as they move on to the district level of the... read more