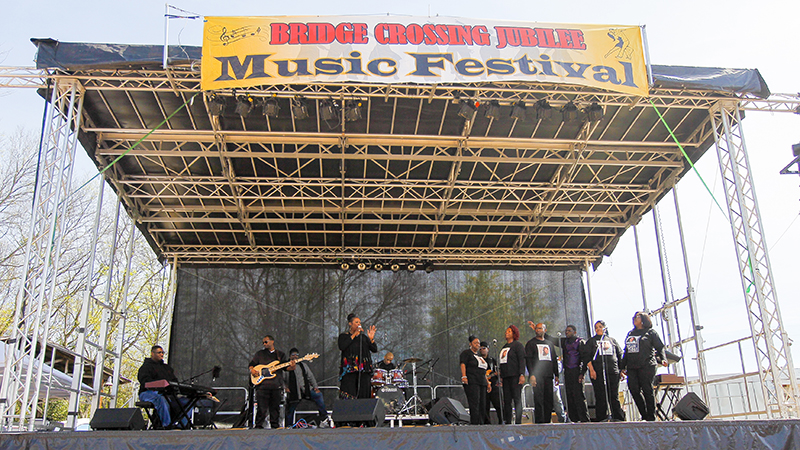 The 53rd annual Bridge Crossing Jubilee Street Festival will be held on the Selmont side of the Edmund Pettus Bridge the first weekend of March.

A dispute over city fees led to confusion on where the annual Bridge Crossing Jubilee street festival would be held last year, but this year organizers say there is no doubt on the event’s location.

Sam Walker, one of the Jubilee’s organizers, said this year’s festival will be held on the Selmont side of the Edmund Pettus Bridge on private property.

“It was a successful event. However, the city had created some confusion. Some people initially cancelled their plans who had planned to come because of the confusion,” Walker said. “This year, there will be no confusion.”

The Jubilee celebrates the anniversary of Bloody Sunday. Marchers peacefully protesting for the right to vote were attacked on March 7, 1965, by Alabama State Troopers and a posse of Dallas County Sheriff Jim Clark’s deputies as they crossed the Edmund Pettus Bridge. This year marks the 53rd anniversary of the infamous march.

Traditionally, the Jubilee’s street festival was held in downtown Selma on Water Avenue, but the venue was changed last year when the city asked organizers to pay $24,000 for police, fire and other city services that have been provided as in-kind services in previous years.

That number started around $35,000 and was eventually negotiated down to around $17,000, but organizers never agreed to pay. Instead, organizers moved the festival across the bridge to private property.

Instead of trying to move the festival back to its original location, Walker said organizers decided to keep the event in its new location.

“The committee decided to pursue doing it in the same spot we had it last year,” Walker said. “We’ve already met with the Department of Transportation and Department of Public Safety and informed them that that’s the plan.”

This year’s Jubilee is scheduled for March 1-4 and will include a number of events, including a mass meeting, pageant, golf tournament, step show, parade, battle of the bands, street festival and more.

With one month to go until the start of the four-day event, Walker said the organizing committee is putting the finishing touches on the Jubilee and are expecting a great turnout.

“We basically have to finalize our entertainment lineup,” Walker said.

Walker said Regina Belle, best known for her singles “Baby Come to Me” and “Make It Like It Was,” will headline the festival. Belle also sang the single for “A Whole New World” from Disney’s Aladdin’s.