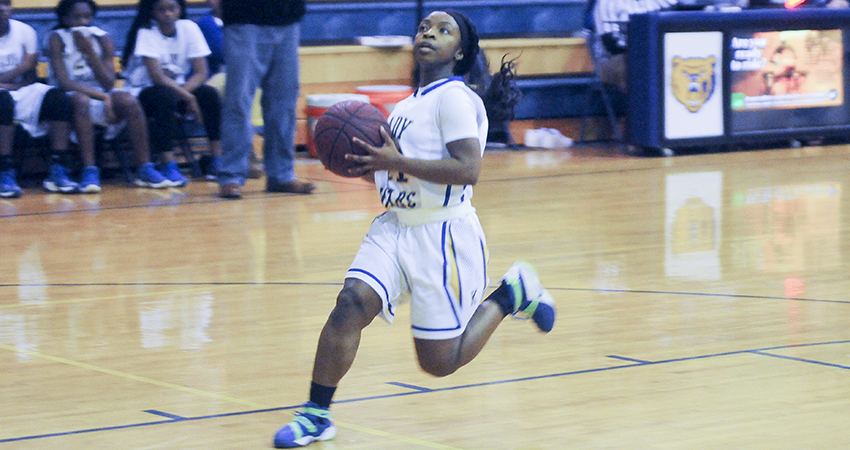 Keith senior Ambreya Snow goes in for the layup in the Lady Bears 53-22 win over American Christian Academy on Senior night.

The senior basketball players and cheerleaders at Keith High School were honored at mid-court in between the girls and boys basketball games in celebration of their Senior Night on Tuesday.

The teams faced the American Christian Academy Patriots, and split the games with them. The Lady Bears won 53-22, but the boys team lost 48-44.

The girls played a complete game and stayed ahead of the Lady Patriots the entire night. The Lady Bears outscored their opponent in each quarter.

“The four seniors are the ones that started off with me when I first got here,” Lady Bears head coach Cecil Williams said. “They experienced the good and the bad here at Keith, but tonight it was important to send them off with a good win that resembled the hard work they’ve put in since they’ve been here. I’m proud of all four of them.”

Seniors Ambreya Snow and Shatavia Moore led the team in scoring with 11 and 10 points respectively. Almost the entire Lady Bears roster managed to score against ACA. In addition to Snow and Moore, eight of their teammates made shots as well.

At halftime, the Lady Bears were up 20-12. They nearly shutout the Lady Patriots in the third quarter, but it was spoiled by a put back layup with 30 seconds left.

The girls put the game away in the fourth quarter by outscoring ACA 13-6. The defense forced turnovers that led to several uncontested, fast break layups for the Lady Bears.

The Lady Bears are preparing for the upcoming area tournament where they will be the second seed. They finished the season with a 12-8 record, and will face Francis Marion in the first round.

While the girls cruised to victory in their final home game of the season, the boys team were unable to get the win over ACA. 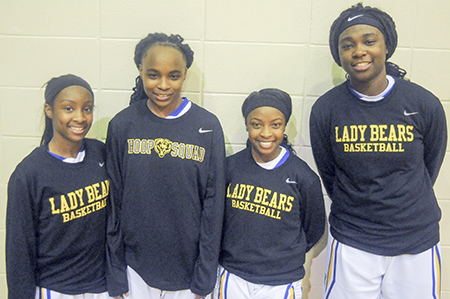 “Some of these guys I’ve had since middle school,” Reeves said. “It’s special to see them as seniors and coming out of high school.”

The first half went back-and-forth between the two teams. One team would go on a quick run and then the other would answer right back. The Patriots had an 11-7 lead at the end of the first, but the Bears wound up leading 19-17 at halftime.

The Bears were led in scoring by senior Tyre Webster, who scored 31 points in the game. Webster scored 17 points in the first half alone. 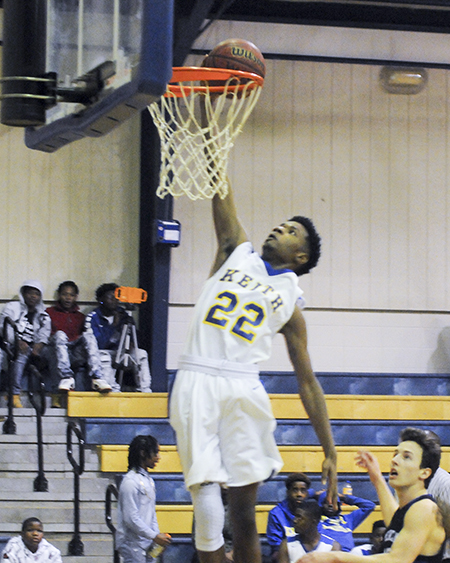 Keith’s Tyre Webster finishes a fast break with a dunk in the 48-44 loss to American Christian Academy on Tuesday night. Webster led the team in scoring with 31 points in the game.

Unfortunately for the Bears, the rest of the offense had a tough night getting their shots to fall. Arayvion Jones was the Bears next leading scorer with 10 points.

The lack of scoring allowed ACA to expand their lead as time went on. The Patriots used their size advantage in the post to get easy shots and fouls that led to an 18-point third quarter. ACA had a 35-30 lead to start the final quarter.

Even though the Patriots shot 46 percent from the free throw line on 26 attempts, the Bears just couldn’t find an advantage on the offensive end. Keith scored 14 points in the fourth quarter. Webster hit back-to-back 3-pointers on Keith’s last two possessions, but it was too late for the Bears.

“We just missed shots,” Reeves said. “It’s just like that sometimes. I’m trying to get my boys to see that you want to win this, but now your main goal is to try and get to the area.”

The Bears (12-8) finished second in the area standings and will matchup against Francis Marion in the first round of the area tournament on Wednesday, Feb. 7, in Aliceville.