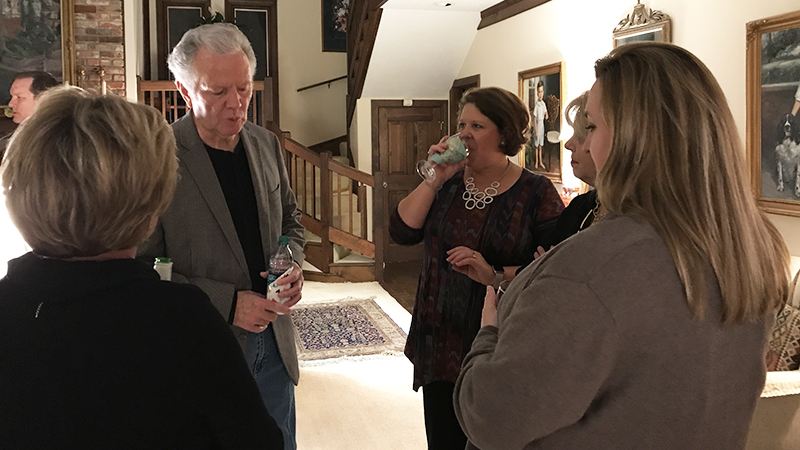 Mississippi novelist Merle Temple, most famous for his book “A Ghostly Shade of Pale,” spent his Friday evening speaking to members of the Selma Book Club.

Temple, who devotes much of his time traveling and speaking at different venues with his wife, Judy, was grateful for the opportunity to speak to interested guests. According to Temple, speaking to book clubs yields the best questions because the members are so immersed in the text.

“I feel some know the characters better than I do,” Temple said. “They give me the most insightful questions because these people love to read. One time, a book club printed out two legal sheets of questions for me. They are not always positive either, they will tell you if there is something they do not like.”

Surrounded by food, drinks and interested readers, Temple charmed the audience with stories of his Hollywood tales and his time in Mississippi drug enforcement. Judy says people are drawn to Temple because he has been through so many different life experiences.

The Selma Book club consists of all women. However, the buzz around Temple’s guest appearance prompted them to allow the husbands to come as well. As members of the book club say, they were very fortunate to have booked someone as well-known as he is.

“This fell into our laps,” book club member Jan Parker said. “We immediately wanted to get him as soon as we heard about his interest. I think it is great he came to Selma for this.”

Members of the book club listened closely as Temple spoke about the good times he had with the Criminal Minds cast and the bad times he had being held hostage by drug dealers or coming in contact with corrupt political figures that have “darkness surrounding them.”

At the center of many of the stories, and just as drawing to the audience as Temple, is Judy. Meeting in their late ages after both losing their spouses, they were married and living their lives constantly on the road. Judy enjoys going all over the country and impacting lives, saying it is difficult to get bored being around Temple so frequently.

“I never thought I would end up going to Hollywood with my husband,” Judy said.

“He keeps life exciting. He is never at a loss for words and he can make you feel, see and taste everything. That is what makes him a good author.”

In addition to speaking to the approximately two dozen audience members at the book club, Temple took time the day before to speak to interested youth at Morgan Academy. He remarks on the different approaches that come with speaking to different audiences, saying that when he speaks to kids he focuses more on inspiration, rather than in-depth textual analysis.

Other accomplishments from Temple’s life include being a number-one seller at a regional Barnes and Noble store, his books being accepted into Jerusalem and his book series’ availability at the University of Mississippi library.

Next, the Temples will head to Florida for more speaking events. Along with speaking at schools and book club gatherings, Temple frequents shelters, rehab centers and prisons to speak about his life experiences and faith.