Morgan Academy loses in second round of area tournament 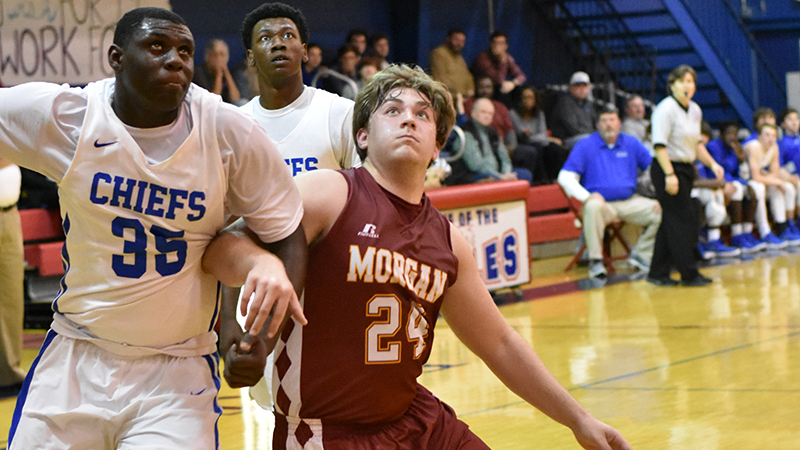 Morgan's Sawyer Hopkins battles for positioning under the basket in the Senators 57-43 loss to Lakeside on Friday. (Photo: Kathy Pickens)

Morgan Academy lost 57-43 to the top-seeded Lakeside Chiefs in the  second round of the area tournament at Fort Dale Academy on Friday after a close, frantic game.

The game remained within a few points throughout the first three periods.

A series of  fourth-quarter mistakes and failures to capitalize by the Senators allowed the Chiefs to slowly build an insurmountable lead.

The two teams engaged in an offensive shoot-out in the first two periods, with the Senators proving capable of matching Lakeside’s talented offense.

Combo guard Dione Allen was Morgan’s most reliable scorer. He was able to keep Morgan intact offensively with dependable shooting from the paint and continuously drawing fouls. Allen finished the game with 23 points.

Center Hayden Bruner also had a strong performance, battling in the paint for rebounds and effectively finishing plays throughout the first two quarters.

Though the third quarter ended with the game still virtually tied, a few missteps were all it took for the game to slowly slip from Morgan’s grasp.

A series of turnovers with five minutes remaining in the game allowed Lakeside to slow the pace of the game and exercise their standout outside shooting to rapidly force a double-digit lead.

Although Morgan tried to answer by forcing Lakeside to the foul line, the Chiefs managed to hold the ball long enough to run out the clock.

“We turned the ball over too much in the fourth quarter, and our outside shooting wasn’t great,” said Hutcheson. “But we know we can beat them. The turnovers are what lost it for us.”

Morgan secured its place in the Elite 8 by defeating Northside on the Jan. 25 and will play its final game of the tournament on Jan. 27.

Christina Watts and Kylan Brown both scored 14 points for the Lady Panthers.