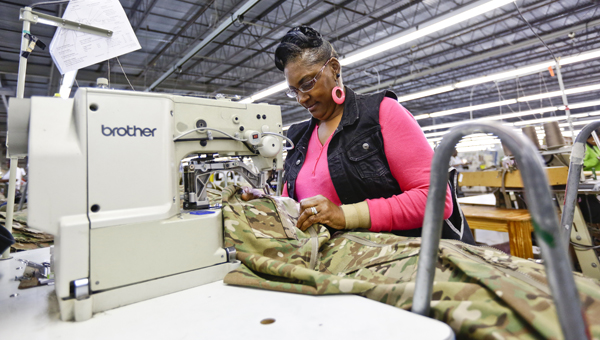 The contract was awarded by the United States Department of Defense on Jan. 11.

“We’re just extremely excited for our people,” said Chuck Lambert, head of manufacturing and operations. “We feel good about the next five years for these folks here in Selma. Our people have been really good at manufacturing this product.”

The company, which was founded in 1987, competed against 12 other uniform suppliers for the contract.

“There is no doubt over the years that American Apparel has proven itself to be one of the premier supplier of combat uniforms for all branches of the military,” Lambert said. “With that being said, we felt there was a time when they were looking at just price, but we’ve always felt like we provided a good, quality product at a good price. We feel like that’s what they see in what we provide for them going forward.”

Lambert said the company is dedicated to  putting out the best product for the county’s soldiers.

The contract is a five-year deal from 2018 to 2023. Lambert said they will start working on producing those coats immediately.

“Our first order is 30,000 per month, and it begins in August, but we will start immediately,” he said.

The company has produced the same coats for many years at its Selma facility.

This is the second military contract American Apparel has received since October 2017, when they were awarded a $48 million contract to produce combat utility uniforms for the Marines Corps. Those uniforms are already in production.

Lambert said there are a number of contracts that are pending award the company is hoping to get.

“There are approximately 15 different awards out there on the solicitations that we have bid. Five of those have now been awarded, and we won three of the five,” he said. “We’re waiting anxiously to see what happens with some of the others.”