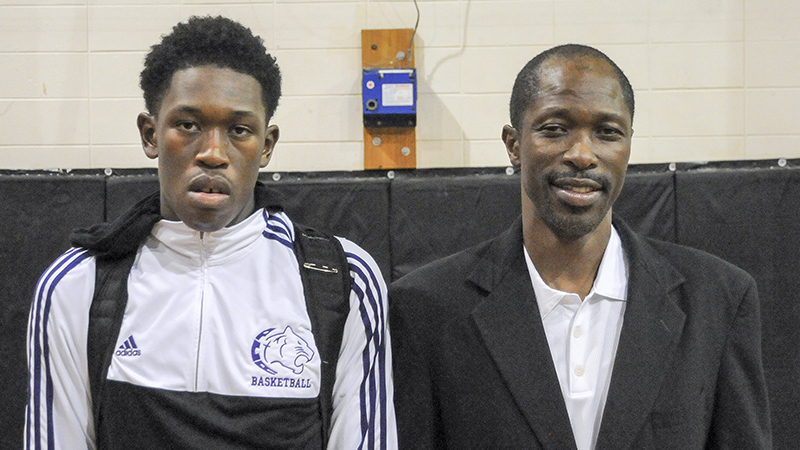 Prattville Christian Center Elijah Jones (left) lost the re-match to his father and Southside head coach Lenord Jones 62-43 on Tuesday night. Both expect to face each other again in the area tournament championship game to even the score.

In the first game this season between Southside and PCA, the Panthers lost 75-36. Southside had players out due to injury, and Elijah had a big night against his father’s team.

Elijah was the tallest player on the court, but Lenord had the right game plan in place to give the Panthers the advantage.

“I would say it’s no different than playing any other coach,” Elijah said. “Today, we didn’t have B.J. Comer, so we have to look forward to the area tournament and be ready to play [Southside] further on.”

According to Lenord, his players were eager to avenge their early season loss.

“Tonight’s game was different from the first game because my team was hurting behind that 30-something blowout,” Lenord said. “They had it in their mind they were going to beat [PCA] tonight, and they came ready to play. I was impressed with their effort.”

Southside’s perimeter and mid-range shooting took PCA’s bigs out of the game defensively.

“We tried to take the big guys out of their rebounding strategy,” Lenord said.

The Panthers made six 3-pointers in the game and Keshawn Arrington had three of them himself. As the shots kept falling, it spread out the PCA defense and created more room for the Panthers to score.

The Panthers defense forced PCA to rely on their shooting. Elijah and Cooper Meadows, who are both over 6-foot-4, combined for only four points. PCA guard Benjamin Segars had to do the heavy lifting with 19 points.

Late in the game, PCA pulled their bigs off the floor, but Southside continued to attack the basket. Arrington led Southside with 15 points and Derrick Griffin scored 13. 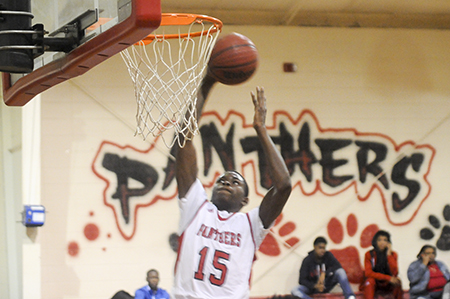 Southside guard Derrick Griffin rises up to dunk an alley-oop in the 62-43 win over Prattville Christian Academy on Tuesday night.

The Panthers played consistent basketball the entire night. The team scored 14 points in the first quarter, 13 in the second, 14 in the third and 17 in the final quarter.

PCA’s highest point total was in the third quarter when they scored just 11 points.

Now that both Lenord and Elijah each have a win against each other this season, both have predicted that they will face each other once more in the area tournament championship game.

“More than likely, in the area championship we’ll have to play [PCA],” Lenord said. “We’ll see each other again.”

The Southside girls team, on the other hand, were defeated 45-25 by the PCA girls team on Tuesday night.

Christina Watts accounted for 13 of her team’s points in the loss. The girls just couldn’t keep up with PCA’s scoring pace. The best scoring quarter for the Lady Panthers was the first in which they scored eight points.

“We are not a great shooting team, so we really rely on our defense,” Southside girls head coach Rand Smith said. “Our game plan was to try and slow it down on the defensive and offensive ends. We had a good first quarter and a pretty decent second quarter, but I give credit to Prattville Christian. They left us in the second half.”

The Keith Lady Bears lost 58-50 to Demopolis on Tuesday night.

The Selma High boys basketball team defeated Stanhope Elmore 47-42. James Anderson led the team with 15 points and 4 steals. The Saints are the Class 6A Area5 regular season champs. They had a 3-1 area record.