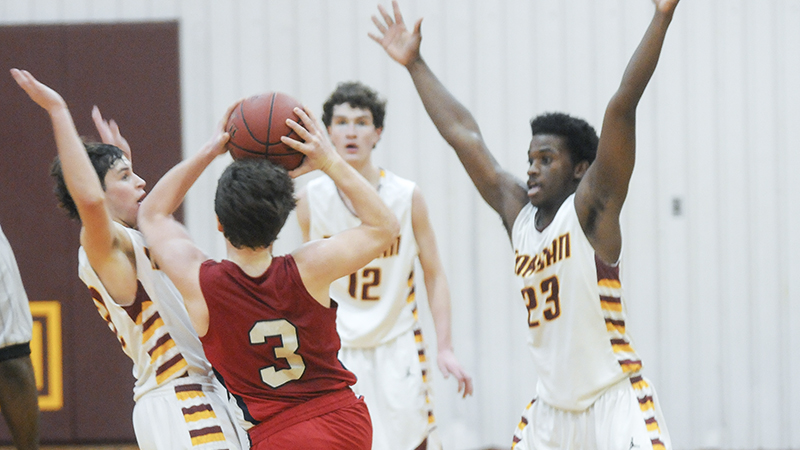 Not only was it the last game of the regular season, but it was also Senior Night for the Senators. The game was initially scheduled for this past Tuesday, but it was re-scheduled due to the icy weather that forced school closings across the state. Morgan Academy decided to cancel the Macon East game, which was scheduled for Monday night, and replace it with Fort Dale since the area game has a higher priority.

The Lady Senators made a late push in the final moments of their game, but Fort Dale held on to win 37-31.

The Lady Eagles were able to use their height advantage to make the game difficult for the Lady Senators. The 6-foot-3 center for the Lady Eagles, Lucy Bates, had 16 points in the game. Her presence in the post also made room for the Fort Dale shooters.

“She’s been giving us a hard time,” Lady Senators head coach Kayla Thacker said. “I think we played well considering last time she had like 25 points.”

However, the Lady Senators never fell too far behind. Abigail Lane led the team with 16 points, and Ellie Adams scored eight points in the game. Fort Dale’s largest lead was 28-17 going into the fourth quarter.

Morgan Academy outscored Fort Dale 14-8 in the fourth quarter, but late turnovers ruined their chances of overtaking the Lady Eagles in the end.

“I think we got better every single game this year, and it’s really showed at the end of the season,” Thacker said. “We lost to Fort Dale by a lot the last time we played them, and we’re in this game if we make a couple more layups and commit a few less turnovers.”

The boys team also found themselves in a dogfight with Fort Dale. After a slow start, the Senators forced the game into double overtime before falling short in the 67-60 loss.

“We fought hard, but just didn’t make some plays in overtime and they did,” Morgan Academy boys head coach Mark Knight said. “We didn’t make free throws down the stretch, but I’m proud of the guys for fighting back.”

Shooting has been hard to come by for the Senators this season, and the struggles continued through the first three quarters of the game. After a 14-point first quarter, the offense went stale and only scored 13-points over the next two quarters.

The Eagles had a 41-28 lead going into the fourth quarter.

Knight’s switch to a press defense to start the fourth quarter was the right call at the right time. The Senators were able to turn the game around by forcing turnovers and capitalizing on them with transition offense.

Morgan Academy outscored Fort Dale 19-8 in the fourth quarter, and Jay Creech’s mid-range jumper with 1:30 left in regulation gave the Senators its first lead since the end of the first quarter. Fort Dale had a chance to put the game away at the free throw line with a minute remaining, but missed both attempts.

In overtime, the Senators survived again after Britton Adams converted an and-one layup to tie the game at 54-54 to force double overtime.

Unfortunately, the Senators ran out of fire power to finish the game. Dione Allen fouled out in the first overtime period, while Britton Adams and Ed Williams fouled out in double overtime.

The Eagles jumped out to a quick 8-2 scoring run, and the Senators were forced to foul to extend the clock.

The Senators comeback was admirable, but too many missed free throws cost them a chance at defeating an area opponent at home. Morgan shot 50 percent from the free throw line on 26 attempts.