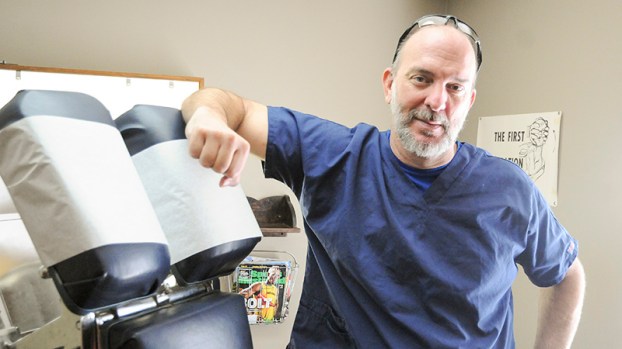 Dr. Ben Weber, DC, recently took over Lightfoot Chiropractic,LLC. Weber is a retired MLB pitcher who won the World Series with the Anaheim Angels in 2002.

On Oct. 19, 2002, at Edison Field in Anaheim, California, the Anaheim Angels trailed the San Francisco Giants 4-3 going into the top of the eighth inning of game 1 of the World Series. Due up to bat for the visiting Giants was Jeff Kent, Barry Bonds and Benito Santiago.

Brendan Donnelly escaped a 3-1 count and got Jeff Kent to ground out to shortstop David Eckstein for the first out of the eighth inning. Scott Schoeneweis walked the future home run king Bonds, and then Angels manager brought in his 6-foot-4 righty Ben Weber to face Santiago with one on and one out.

Weber was selected in the 20th round of the 1991 MLB draft by the Toronto Blue Jays. He spent six seasons in the minors before he was released. He had a pit stop in the Western Baseball League pitching for the Salinas Peppers in 1996 followed by two years pitching in Taiwan before he returned to the minors, this time for the Giants. Weber finally made his MLB debut with the Florida Marlins on April 3, 2000 at the age of 30. He was claimed on waivers by the Angels in August of the same year.

His first pitch broke Santiago’s bat. A good way to start your first World Series appearance. Santiago then grounded out on a diving stop by Eckstein for the second out. The next batter, Reggie Sanders, worked the count full before Weber burned him inside with a 91-mph fastball to end the inning.

The Angels lost game 1, but Weber and the Angels won the World Series in seven games to cap off a 99-63 championship season.

After his career ended, he was unsure what he was going to do next.

“When I was finally done with baseball in ’07, I didn’t know what I was going to do at that point with my life,” he said.

It wasn’t until a friend of his recommended looking into chiropractic that Weber found a new direction he was passionate about pursuing.

“When I initially went to college (University of Houston) I was going to be a medical doctor,” Weber said. “And then baseball got in the way for 17 years. Throughout my career, I started seeing a chiropractor. They would be in our clubhouse all the time, and I thought these guys are interesting.”

In fact, it was a chiropractor who correctly diagnosed a serious injury Weber had that the MLB team doctors were missing.

In 2004, Weber was pitching in a game against the New York Yankees in Anaheim on an 80-degree day when his right hand went cold and numb.

“I didn’t know what was going on and I lost all the feeling in my hand,” he said.

The team doctors diagnosed him with carpal tunnel syndrome. Weber rehabbed his hand, but a year later the numbness returned. Weber’s fastball dropped from 95 mph to 85.

“I finally went to a buddy of mine who was a chiropractor, and he goes ‘You don’t have carpal tunnel syndrome. You’ve got something in your neck that’s going on,’” Weber said.

After an MRI in 2006, Weber visited a neurosurgeon in Beaumont, Texas that told him he needed surgery two years ago.

“My heart sank because I wasted two years trying to rehab everything when I needed surgery immediately,” he said. “By then, it was too late. I was done. My career was over.”

According to Weber, that experience had a big influence on why he chose to pursue a career in chiropractic.

He enrolled in the doctorate program at the Texas Chiropractic College in Pasadena, Texas, to start his new career path. Going back to school was a new and difficult challenge for a 37-year old attempting to re-invent himself while also raising his seven-year old triplets.

“I actually almost dropped out my first semester it was so hard,” he said. “A lot of people don’t realize that chiropractic college is essentially medical school. I was dissecting bodies my first semester.”

Even though it was difficult, he stuck with the program to show his kids that life didn’t stop after being a professional baseball player.

“I wanted to set that example for my kids,” he said. “And I really wanted to help people, because I knew chiropractic worked and it helps people.”

His hard work paid off when he graduated in 2011 and started his new career. He spent the last five years practicing in Montgomery, but wanted the opportunity to work for himself and create his own practice.

An opportunity presented itself in Selma, but only after the passing of awell-respected local staple in the community.

Dr. William E. Lightfoot, DC, passed away this past August at the age of 69. He was a US Army veteran of the Korean War and his practice, Lightfoot Chiropractic, LLC, located on 2117 Broad Street has been operating since 1975.

“When I found out that this clinic [Lightfoot Chiropractic, LLC] was open and I knew how successful it was and how awesome Dr. Lightfoot was, I figured this was my opportunity to jump on something that was not only going to help the community, but also help myself out in the process.”

Weber never met Lightfoot, but he’s heard about the work and impact he had on the community.

“He had this clinic for 40 years and he was highly successful. He was a pillar in the community,” Weber said.

Even though he has moved into the office and is building his own practice, Weber wants to respect Lightfoot’s legacy and the name he’s established in the community.

“Ultimately, I want to own it and have it as my own. But I’ll definitely keep the name,” Weber said. “I’m very respectful of what Dr. Lightfoot has done here for 40 years and I would never change the name.”

The Stillman College Tigers women’s basketball team (8-8) defeated the Concordia College Hornets 70-59 on Thursday night. Not only did... read more