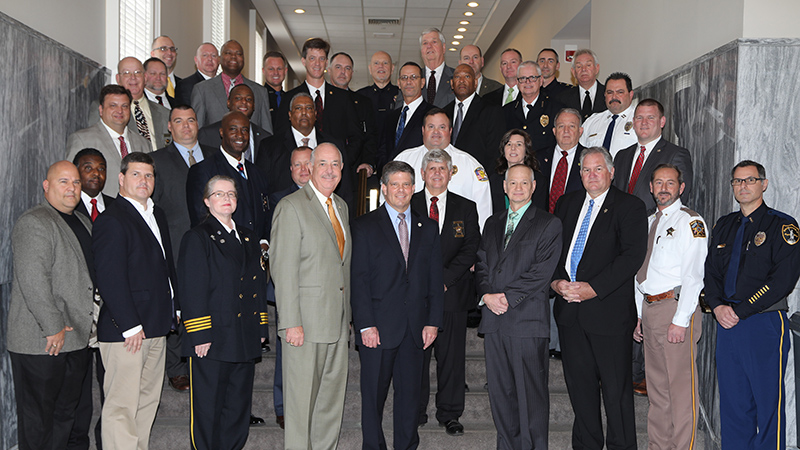 Jackson was sworn in last Thursday on Jan. 11 at the state Capitol along with other members of the task force.

“What we’re trying to do is have our task force combine with some others to tackle all these issues of drugs, gangs and guns, so we have more manpower, more equipment, more everything, to deal with these issues we’re all dealing with,” Jackson said.

The task force was created in October by the Alabama Department of Economic and Community Affairs (ADECA) and the Alabama Law Enforcement Agency. Its purpose is to share resources and intelligence to break up drug operations throughout the state and fight violent crime.

Gov. Kay Ivey awarded $1.3 million in grants in November to help establish the task force to each of the seven regional offices.

Hal Taylor, secretary of the Alabama Law Enforcement Agency, is already pleased with the work the task force has done since it was established.

The task force is made up of 75 law enforcement officers from 47 different agencies.

“I commend those law enforcement officers who have agreed to become a part of the Alabama Drug Enforcement Task Force and the commitment and sacrifices they make in carrying out their duties,” said Kenneth Boswell, director of ADECA. “ADECA is proud to be a part of this process that will take drugs out of our communities and make our streets safer.”

During its first three months of operation, the task force has opened 172 criminal investigations, which resulted in 275 criminal charges and 99 arrests.

Members of the task force have seized illegal drugs, such as opioids, heroin, cocaine, marijuana and methamphetamines with a total street value of an estimated $2.1 million.

The task force has also confiscated 98 firearms from suspects.

“One good thing about having my office involved is to identify the problems we’re having in Dallas County and some of my other counties in my circuit,” Jackson said. “I’m able to let them know all these issues we’re having with gangs.”

Jackson said being a part of the task force makes it easier to call on other agencies for help.

“It’s easy to call other agents and agencies in to help fight our problems, and of course, we’ll help them when they have a problem,” Jackson said. “Selma is one of the big issues and places to tackle from the perspective of law enforcement across the state.”