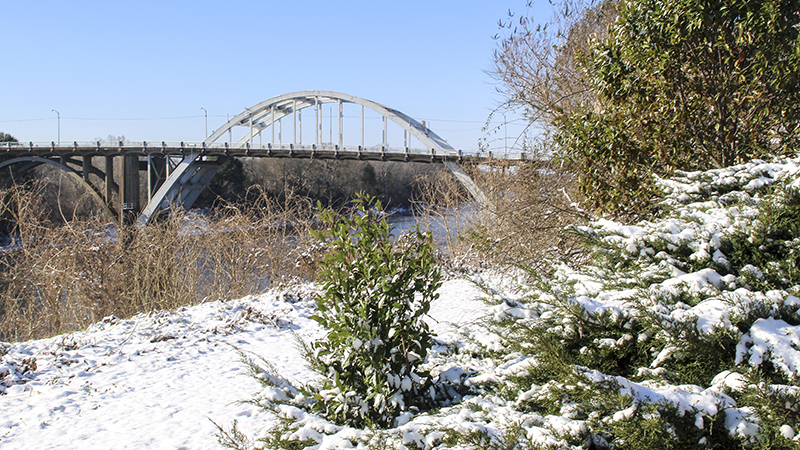 The banks of the Alabama River and the Edmund Pettus Bridge paint a pretty picture Wednesday morning in Selma.

Winter weather and frigid temperatures have returned to Selma and brought along with roads, business and school closings.

“We are advising people to stay off the roads as much as possible,” Wyatt said.

Williams believes the students will not have to make up for the days missed due to weather because Gov. Kay Ivey declared a state of emergency.

Dallas County Schools also made the decision to close Thursday.

The Selma Area Food Bank will not be open for its normal Thursday food distribution. According to volunteer Nancy Bennett, this decision comes after the Dallas County EMA said the roads are unsafe for travel and cannot provide a time frame of when the status will change.

“There are still roads and bridges that are considered usable only for emergency vehicles, and the temperature will not get back above freezing until tomorrow,” director of the Dallas County EMA Toya Stiles said. “This is abnormal temperature for Selma. To see it snow again in less than two months is something that does not happen.”

According to Wyatt, the late-night precipitation in Selma and surrounding areas caused the roads to ice over quicker compared to areas in the northern part of the state that saw snow during warmer hours of the day.

While some roads are slowly improving, the EMA says further evaluation of county roads will be necessary before determining their time table for usage.

As it currently stands, the hard freeze warning administered by the NWS will last until 9 a.m.  The weather for the night of Jan. 17 could drop as low as 17 degrees with possible winds of 10 mph. Because of this, Selma could see another night with iced roads that could last into the morning of Thursday, Jan. 18.