Prayers given on National Day of Racial Healing 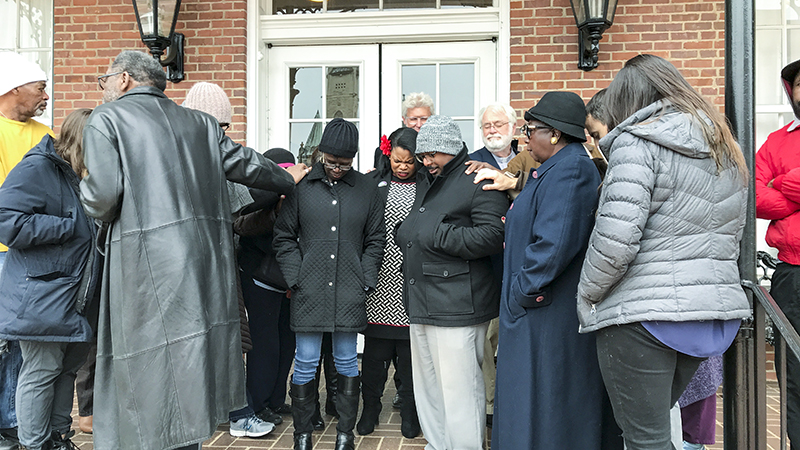 Around 30 members of the Selma community met on the steps of City Hall to participate in a prayer circle in collaboration with the National Day of Racial Healing.

The National Day of Racial Healing began in 2017 through the support of the W.K. Kellogg Foundation, a philanthropic organization.

Selmians lifted up their prayers and concerns not only for the city but for a nation still dealing with racial divisions.

Despite the frigid temperature, individuals from the city still showed up to participate.

This assured Ainka Jackson with the Selma Center for Nonviolence, Truth and Reconciliation that the residents care about what is going on both small and large. She also understands change does not happen overnight.

“There has never been a movement that started with a lot of people,” Jackson said. “The people here today were sincere about the racial healing.”

Pastor Mike Lewis opened up the prayers with well wishes of “harmony and peace for people of all colors.” This gradually grew into a true prayer circle, where everyone present had something meaningful they wanted to express.

The event closed with Lewis and others saying a prayer over leaders of the Selma city government, hoping they can help racially heal the city.

Daron Harris with the Black Belt Community Foundation has dedicated much of his time and effort towards improving Selma and other Black Belt areas. Before the events for the NDORH, he went on radio with Randy Williams to inform the community of what was going on and took time to answer their concerns. At the prayer circle, he was motivated to keep pushing things in the right direction.

“We want to provide financial help but want Selma to decide what to do with the money,” Harris said. “The money may be coming from the outside, but it is being administered by natives of the Black Belt.”

As it currently stands, the prayer circles in recognition for NDORH happen annually.

However, there are people throughout Selma who believe more spiritual growth and community bonding is needed.

Robert Turner, program officer and project coordinator for the Black Belt Community Foundation, thinks that significantly more community events like this are needed.

“I think we need weekly prayer circles, instead of annually,” Turner said. “People do not treat people with respect anymore. You turn on the news and it sounds like a call to arms.”

Along with the prayer circle, other events have taken place and are scheduled for the celebration of Dr. King’s achievements. Known as the Acts II Initiative, the Selma-led program promotes worship, service and fellowship are and divided over a three-day period.

Sunday, Jan. 14 acted as a day for worship where churches focused on racial healing and issues concerning the Selma community.

Acts II Service was on MLK Day, the 15th, and had a slew of events planned to promote racial harmony. Around noon of that day, individuals met at rotating churches in the city for lunch and a winter giveaway. The giveaways handed out winter clothes to those in need. That afternoon and into the night, the Selma Center for Nonviolence, Truth and Reconciliation hosted healing circles, dinner and racial equity training.

Jan. 16 is used for Acts II Fellowship, where residents met to participate in prayer or healing circles such as the one outside City Hall. Later that night, the NDORH ends with a concert featuring Kishi Bashi and the No-No Boy Project.

According to Harris, the word spread as far as Sterling, Kansas, where local college students came down to participate in the race discussions at the SCNTR.

Jackson, who is the executive director of the SCNTR, believes the MLK events went very well.

“I thought it was an amazing turnout,” Jackson said. “Selma represents more than black and white, it is becoming a place of dialogue and community that can serve as a launching pad.”

For more information regarding the W. K. Kellogg Foundation and the National Day of Racial Healing, visit www.wkkf.org.

For more information regarding the Selma Center for Nonviolence, Truth and Reconciliation, visit their website at www.selmacenterfornonviolence.org.

Winter weather could cause problems