Winter weather could cause problems 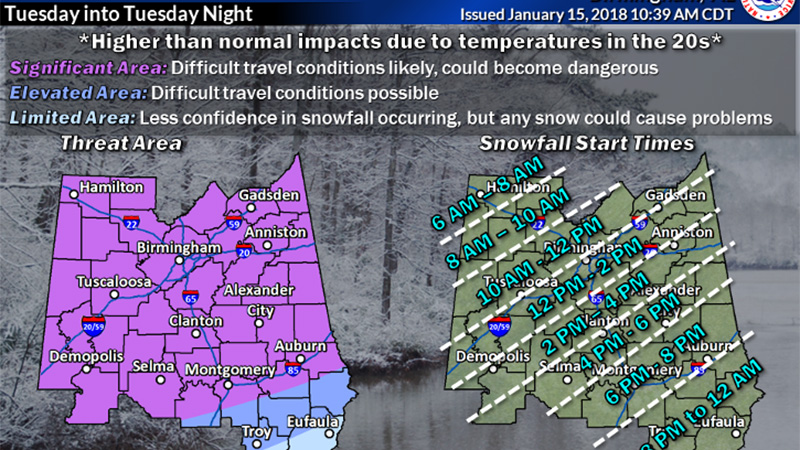 Dallas County could see a small amount of snow Tuesday afternoon starting at 4 p.m. Any snow could melt and then refreeze, causing dangerous road conditions.

A light snowfall and freezing temperatures could cause major travel issues in Selma and Dallas County Tuesday evening and into Wednesday morning.

Dallas County was initially included in an elevated impact area, but the latest forecast from the National Weather Service in Birmingham has the county in a significant impact area.

Nathan Owen, a meteorologist with the NWS in Birmingham, said the window for snowfall in the area is from 4 p.m. to 6 or 7 p.m.

“There will probably be some light snow generally less than two inches, but the concern will be as that snow falls, it could melt onto roads,” Owen said. “Temperatures are going to drop rapidly into the twenties as the system moves through, so any of the snow that melts on the roads could refreeze and cause some significant travel issues.”

The snow impact is expected to be higher than normal due to the temperatures being so low. According to the NWS, travel conditions could become dangerous.

“Whenever there is ice on the road, the roads will become very slick. The biggest concern is that vehicles won’t be able to have traction on the roads when they become iced over,” Owen said. “It’s a potentially high impact situation.”

The national weather service is urging people to stay off the roads once the snow begins.

“Unless you have to absolutely be on the roads, avoid travel,” Owen said. “Once the snow starts to fall, the conditions will go down rapidly.”

People that do have to travel are urged to use extra caution and not make any sudden stops or turns. Once the roads ice over, they are expected to remain that way until sometime Wednesday morning.

“Temperatures Tuesday night into Wednesday morning will probably drop into the teens, so all of that is going to be freezing throughout the night and remain frozen throughout the morning,” Owen said.

Toya Stiles, director of the Dallas County Emergency Management Agency, is keeping a close eye on the weather, especially after the last time it snowed in Dallas County in early December. The county was expected to get less than an inch of snow but received several.

“I just spoke with our county road department and with the city’s public works department, and they have the sand rucks ready and they have plans to sand the bridges and some of the roadways,” Stiles said.

Stiles said she will continue to monitor the weather and stay in contact with the National Weather Service.

Hattie Shelton, superintendent of Dallas County Schools, said no decision has been made yet for Wednesday, which could be impacted if there is still ice on the roads.

Morgan and Meadowview Christian planned to be in school as of Monday afternoon unless there is a significant change to the weather.