Looper, who helped take American Candy Co. from a regional business to an international one, passed away Monday at the age of 86. 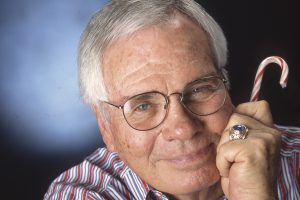 Byrd Looper, a veteran and civic and business leader in Selma, died this week at age 86. He helped make American Candy Co. an international business in its heyday.

“He left us with an image of someone who loved his family, cherished his friends and his community,” said Lisa Looper Jorgen, Byrd’s daughter.

Byrd was born in 1931 in Gastonia, North Carolina. He’s an alumni of Duke University, where he played football for the Blue Devils. He also met his wife, LaNelle, there in a Shakespeare class. They married in 1955, and he served in the Marines until 1957.

A decade later in 1967, American Candy Co. brought him to Selma. He began working there as director of sales and marketing, and was eventually promoted to president in 1979. Byrd had a reputation for being a heck of salesman.

“He was a real go-getter. He was a fantastic salesman,” said Charles Pollack, who worked with Byrd at the candy company for 19 years.

“Byrd was a real hard, hard worker. He was the last one to leave at night and very, very attentive to details,” said Rex Waldrop, a good friend of Byrd’s and a co-worker at American Candy Co. “He was kind of a superhuman being.”

Byrd is credited with getting the company awarded a national license by Disney to produce Disney candy.

“We had a Disney license and manufactured a lot of candy products under the Disney candy label, which Byrd got,” Waldrop said. “It really, really boosted our sales overseas. People were crazy about Mickey Mouse and Donald Duck and all.”

Selling candy was something Byrd loved to do because it makes people happy.

“Everyone could relate to candy, and dad saw it as we sell happiness,” said Lesley Looper, Byrd’s daughter. “It’s candy. The candy made people smile, and he liked making people smile.”

Lesley and Lisa both have memories of their father coming home after a day’s work smelling like candy.

“We could always tell when he’d been on the plant floor that day because he smelled like the scent of the flavor of the candy that they’d been making that day,” Lesley said.

Byrd didn’t just love making and selling candy; he also loved sharing it with others. It was almost like his calling card.

“When I went off to college, people loved it when dad sent me candy on my dorm hall,” Lesley said. “My dorm mates would say thank your daddy for me, and I always would. I could hear his smile over the phone.”

During his time in the candy business, Byrd served on the board for the National Confectioners Association from 1981 to 1990. He was honored as Candy Dean by the National Candy Wholesalers in 1980. He retired from the company in 1990, and 11 years later he was inducted into the Candy Hall of Fame in 2001.

He was a successful businessman, but he was also successful at many other things, such as helping raise the money to renovate the historic St. James Hotel in the 90s.

“When dad told me he was going to do it, I thought, dad, I don’t see it. I was not optimistic,” Lisa said. “And it blew me away what they accomplished as a team and that he had a leadership role. That gave him a ton of pride.”

A $6 million renovation of the St. James was completed around Christmas 1997.

A year earlier, in 1996, Byrd was a torch bearer for the Olympic Games, which were held in Atlanta.

“He was nominated and became one of the torch bearers,” Waldrop said. “The torch came through Selma, and they had about eight torch bearers that went one mile and passed it on to somebody else.”

Byrd was also involved in civic groups throughout Selma, including Rotary, the Selma County, the American Legion and the Quarterback Club.

“He felt that he had lived a wonderful life. He was happy with all of his decisions. He really didn’t have any regrets,” Lisa said.

A memorial service for Byrd will be held Saturday at Cornerstone Presbyterian Church at 2 p.m.