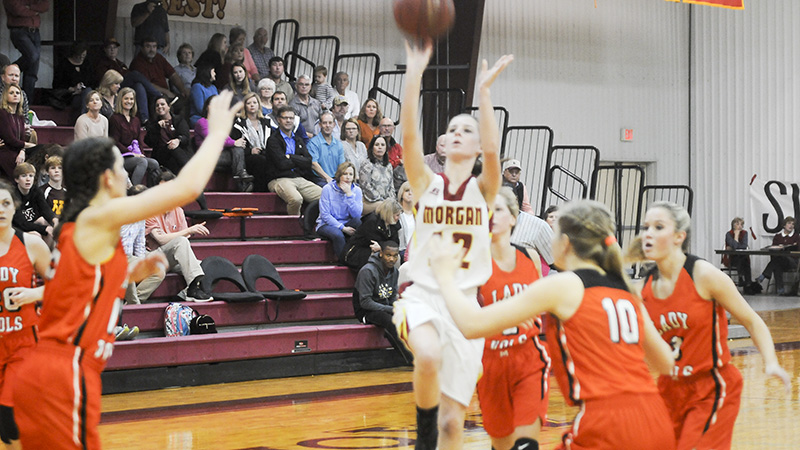 In the final stretch of the season, each game is an opportunity to set themselves up for a good seeding in the area tournament.

The Lady Senators maintained their lead through the entirety of the ball game in the 47-40 win over the Lady Vols.

According to girls head coach Kayla Thacker, it was the most complete game the girls had played all season.

“Tonight, was the best game we played all year,” she said. “I feel like all the members of the team are now on the same page with what our plan is and how we play basketball.”

Junior forward Abigail Lane led the team with a career-high 22 points. She earned 14 of her points at the free throw line on 18 attempts.

“It’s the biggest game that she’s had in her basketball career,” Thacker said. “She’s able to get all of those open shots that we want because she practices them. She tries to get better every game and it shows now that everybody’s on the same page.

The game was won at the free throw line due to Monroe Academy’s early foul trouble. As a team, the Lady Senators shot 69 percent from the line on 36 total attempts.

“I preach in close games free throws in the end will win it,” Thacker said. “And tonight, it did too. It kept us far enough ahead, so that we didn’t have to worry about a last-minute buzzer beater.”

Thacker was pleased to see her players hard work yield results on the court and in the score book. At the start of the season, only a few of the girls showed confidence in their shot. Now, the team plays more confidently and is able to score in multiple ways.

The Lady Senators are 2-2 in area games this season with losses to Fort Dale and Monroe, and wins against Monroe and Hooper. The girls have re-matches with Fort Dale and Hooper left on the schedule to determine their placing in the area tournament.

Shortly afterwards, the boys cruised to a 54-28 victory over the Volunteers.

However, the sailing wasn’t very smooth early on.

“We got off to another slow start, which I preached hard against before the game,” boys head coach Mark Knight said. “Our defense has really improved over the last three games. I think that was the difference, our defense.”

The Senators struggled to create offense in the first half of the game. In fact, they had to play catch up at the end of the first quarter just to tie the game at 9-9.

“Hayden Bruner and Sawyer Hopkins did a really good job inside, and Colton Roberts gave us some good minutes off the bench,” Knight said.

The Senators shot more confidently in the third quarter and continued to expand their lead. Senior guard Jay Creech led the team with 10 points. Britton Adams, Dione Allen and Sawyer Hopkins each scored nine in the game as well.

“We knocked down a few three’s in the second half that got us going,” Knight said.

The Senators had a 30-point lead with 3:36 left in the fourth quarter before Knight pulled his starters off the floor.

The boys team is undefeated in its area with a 4-0 record. They still have an opportunity to secure a good seeding in the area tournament, but they also have area games remaining against Fort Dale and Hooper.

“We’re in the driver’s seat,” Knight said. “We just have to win two more games to clinch.”