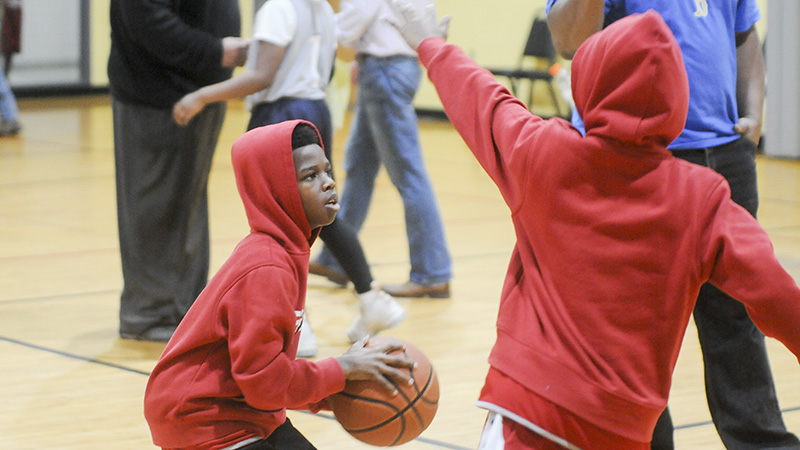 YMCA basketball players warm-up before their first game on Tuesday night. Family and friends filled the bleachers to cheer for the kids on Opening Night.

Basketball season for the YMCA of Selma-Dallas County youth league tipped off this past Tuesday.

More than 130 kids signed up to play in the Y’s basketball league this season. The league has five teams for kindergarten through second grade, five teams for third and fourth graders and four teams of fifth through sixth graders competing.

The teams have been practicing since this past November and were ready for their first game of the 2018 season.

On the first night, five games were played to start the season.

The Y’s bleachers were filled with friends and family members who came to support the players.

“We had a packed house. All the way from the first game until the last game,” YMCA program coordinator Chase Morris said. “It was really good to see so many families and their friends to come out just to watch some basketball.

The gym was split in half so the teams in the younger divisions could play simultaneously on the lower rims.

The fifth and sixth graders played on the full-length court with the 10-foot rims in the final game of Opening Night.

“Overall, I think the kids enjoyed competing against one another,” Morris said. “There is a lot of potential with the basketball program with the Selma YMCA.”

The league wouldn’t be able to operate without the help of the volunteers. In addition to the volunteer coaches and referees, YMCA volunteers also assisted with admission, concessions and operating the scoreboard for all of the games.

“We are a non-profit organization, so the only money we receive is from grants and people giving money from the community,” Morris said. “To have people take the time out of their day to come and help out our basketball program means the world to us.”

The atmosphere at the Y was competitive, but encouraging. Even though each team wants to win, the Y’s volunteer coaches and referees make the basketball court a learning environment as well.

“It was nice to see that the refs and coaches really cared about the development of their players, and they weren’t all just there to win,” Morris said. “I definitely don’t take it for granted that we have the coaches and referees that we do.”

The next set of games will be played on Thursday evening.

“It was nice to see the community support the families and community showed for our basketball program,” he said. “I want to personally thank those who came out, and I look forward to the rest of the season.”