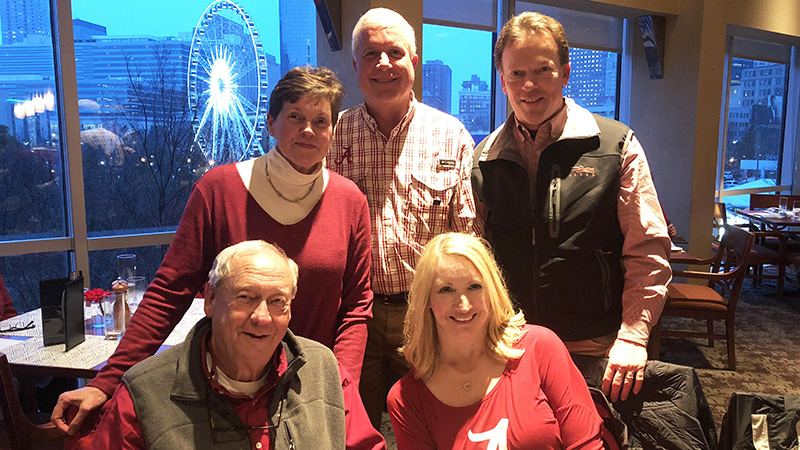 One of those fans along for the ride was Charles “Buddy” Perkins.

Perkins, who was born on campus in Tuscaloosa and attended his first Crimson Tide football game in 1956, is a veteran of national championship games, having attended nine. He is also a board member of the Dallas-Wilcox Bama Club.

“It’s always a lot of excitement being in a championship game,” he said. “Very few people get to make one of these. I think this is my ninth one, and we’ve lost one in that group. I’ve been coming to championship games since 1965.”

Perkins didn’t make the trip to Atlanta this year alone.

He made his first stop in Tuscaloosa to meet up with his niece Martha Phillips, her husband Gary Phillips and their friends Bill and Laura Price, who were all also going to the game.

“I needed a ride, so I got up with them to come up Monday morning,” he said.

Before the game, Perkins and his party had dinner at the Prime Meridian restaurant at the Omni Hotel across from the CNN Center.

“I hate to say we’re spoiled, but we sort of expect to win,” Martha said. “I know that’s a terrible thing to say because it doesn’t sound like you should be excited about that. It’s apart of our process. We’re here. We earned it. We expect to finish and finish strong.”

Despite some issues with exchanging digital tickets, Perkins and his crew enjoyed their pre-game experience traveling to Atlanta and getting ready for the game.

Perkins had seats on the 100 level in the endzone. His preferred spot for watching his Alabama Crimson Tide. 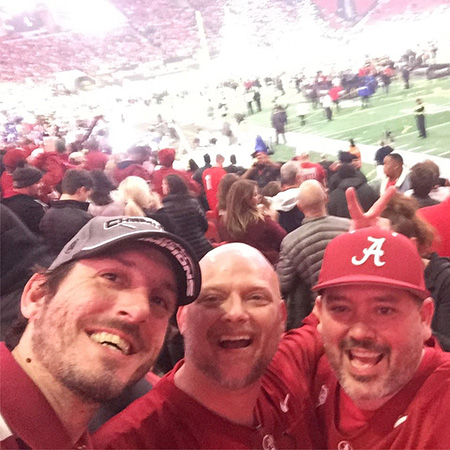 Perkins wasn’t the only one from Selma to make the trip. Clay Carmichael made the trip with family members.

Carmichael’s path to the National Championship was gifted to him as a Christmas present from his brother-in-law.

“It was a blessing to get to go,” he said. “It was a pretty awesome Christmas present.”

Carmichael met with his brothers-in-law, Greg Collins and Bill Beason, this past Sunday in Montgomery before driving to Atlanta.

On game day, he waited out the long lines and still managed to get to his seats 30 minutes before kick-off.

“I had endzone seats,” he said. “Nosebleed section, but really there’s not a bad seat in the stadium.”

A day after the game, and Carmichael is still recovering from the excitement of the game. He didn’t get back to his hotel room until around 1:30 a.m. Tuesday morning.

“I’m still so juiced over that win,” he said. “It’s unbelievable. I couldn’t believe we came back. It was a heck of a game to go to.