Frigid weather hurts some businesses, while keeping phones ringing at others 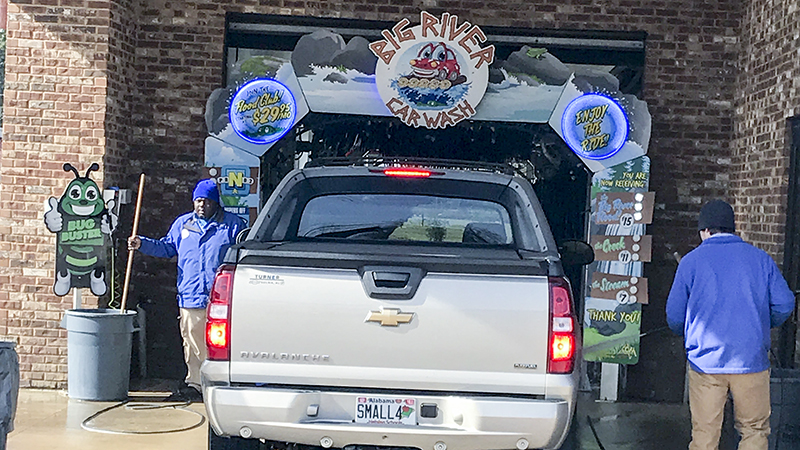 The recent cold weather has affected some outdoor businesses. Big River Car Wash has had to cut back on morning hours due to the freezing temperatures, which caused brushes to ice= earlier in the week. Other businesses, especially plumbers and HVAC repairmen, are in high demand.

The cold weather that continues to stick around Alabama is impacting businesses both positively and negatively.

Freezing temperatures have loomed over Selma and other parts of the state for a week and a half now.

“I have to constantly check our equipment it has been so cold,” Desmond Looney, manager at Big River Car Wash, said. “I opened the doors Monday, and I had brushes that had turned to ice. It’s definitely the coldest period since I began working in Selma.”

Looney’s car wash had to fully close down Monday and Tuesday due to the weather. Wednesday, Thursday and Friday all had late opening times because of morning temperatures. He also claims his energy bill is skyrocketing as a result of constantly needing heat. While the hours of the stores have had to fluctuate, Looney said customer demand has remained steady.

Another car wash that has had to cope with the cold is Goo Goo Car Wash. Manager Larry Puckett says business has been minimally affected by the weather other than a couple buckets and hoses that have needed to thaw. Despite the cold, the employees all stay warm by bundling up to prep the lines of cars sprawled out onto Broad Street.

“It has been 20 to 25 years since it has been this cold while I am working,” Puckett said. “But this won’t change anything. We still have customers stretching around to the street.”

Although the Goo Goo Car Wash in Selma was relatively unaffected, their store location in Alexander City saw days where they had to open late due to morning temperatures.

Some establishments have seen a significant uptick in business as a result of the cold, such as HVAC companies.

Chris Strickland, owner of Klimate Kontrol Heating & Air located in Valley Grande, says his business has doubled as a result of the continuous frigid conditions. On a normal work day, Klimate Kontrol receives about 40-50 work calls. Over the cold stretch, Strickland says they are averaging closer to 80-100 work calls per day.

Reasons for their rise in business is largely due to heaters having to work overtime.

“We have had cold weather here before, but never anything like this that lasts this long,” Strickland said. “The calls have been non-stop.  Most heating units here are not designed for this type of weather.”

The local Papa John’s Pizza has also seen an increase in business. The cold is forcing people to stay inside and ordering food instead of going out to eat. General Manager of Papa John’s Terrance Shankland has seen firsthand how Selma residents’ behavior has changed because of the weather. According to Shankland, pizza deliveries have gone up while pickup orders have gone down.

Shankland said his drivers have gone “above and beyond” to provide customers satisfactory service despite how it feels outside.

One organization says they have not seen any change in their day-to-day operations. Assistant Fire Chief Chris Graham says that the fire department has not noticed any increased fire activity as a result of the cold. He also ensured the public that icy temperatures do not prevent the firefighters from performing their duties.

“We are ready to respond whether it is hot or during the winter time,” Graham said.

The temperature is predicted to rise for next week to more seasonal averages for January.