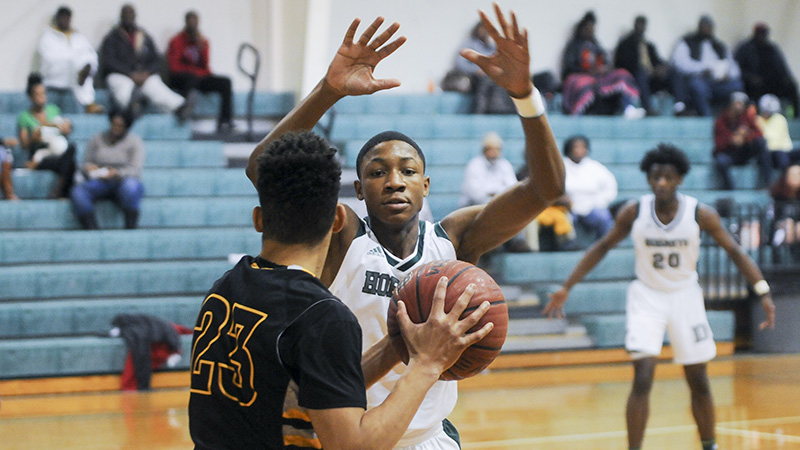 Dallas County’s Kendall Thomas averaged 16 points per game in his junior season and earned a spot on the 2017-18 All-County Basketball team.

The Dallas County Hornets boys and girls basketball teams came back from their Christmas break ready to play as both teams defeated the Billingsley Bears with ease on Thursday night in Plantersville.

The Lady Hornets scoring ability gave the team a 53-26 victory over the Lady Bears. Dallas County’s 36 points in the first half alone would’ve been enough to win the game.

“Back from the break, we came out a little sluggish but we got it going in the second quarter,” Lady Hornets coach Eddie Jackson said.

DCHS guard Ebony Simmons single-handedly outscored Billingsley with a 27-point night. J’Kiera Peterson was second on the team in scoring with 13 points herself. Both Simmons and Peterson made three 3-pointers in the game.

“We kind of depend on [Simmons],” Jackson said. “As she goes, the team goes. If she doesn’t score, it’s going to be hard for us to win.”

The Lady Hornets defense were suffocating in the first half. The defense only allowed five points in the first quarter and shutout the Lady Bears in the second.

“Play good solid defense and we’ll have a chance to win every ball game,” Jackson said.

Dallas County had a comfortable enough lead, that Jackson was able to pull his starters early and give his younger players more playing time. The scoring slowed down, but the Lady Bears were too far behind to rally.

Jackson was glad to see his girls knock the rust off in the first run after the break because they have an area game on Friday at Marbury. The Lady Hornets are 1-1 in area play so far, so getting an area win would be much more meaningful for the season.

“We have a big area game tomorrow night against Marbury over at their place, so it’s going to be tough to win,” Jackson said. “But if we play good, solid defense, we’ll be alright.”

The Dallas County boys team dominated in its 80-46 win over the Bears.

“We came out playing hard, and we played a lot of team ball,” Hornets head coach Cliff Nix said. “That was one of our goals going into the new year. I said we ‘re going to flush ’17 down the toilet, and let’s try to get off to a new year.”

The Hornets aggressive trap defense pressured the Bears into turning the ball over. When Billingsley did manage to break the press, the Hornets were able to recover and challenge the Bears in their half-court as well.

“We were fresh,” Nix said. “We played with a lot of intensity.”

The Hornets starters did a good enough job, that Nix was able to rest them for the majority of the second half. DCHS point guard Keyshawn Fails led the team in scoring with 13 points after coming off the bench. Deandre’ Baker, who struggled shooting from beyond the arc early in the game, finished the game with 12 points after knocking down three 3-pointers in a row in the third quarter.

“Everybody played and got some valuable minutes tonight,” Nix said.

The Hornets piled on another 33 points after halftime, and the Bears were too far behind for its 25 point second half to put a dent into the deficit.

Going into the back half of the season, Nix stressed that continuing to play team ball would be essential to winning the upcoming area games left on the schedule. They are 1-1 in area games, and have a tough road game against Marbury on Friday night.

“We turned the ball over in ’17,” Nix said. “We need to protect the ball a little better, so it’ll give us a better chance to win.”

The win brings the girls record to 5-9.

The Southside Panthers boys team defeated A.L. Johnson 74-47 on Thursday night. The Panthers were led in scoring by Keshawn Arrington, who scored 21 points, and Markendrick Williams, who finished the game with 19 points.