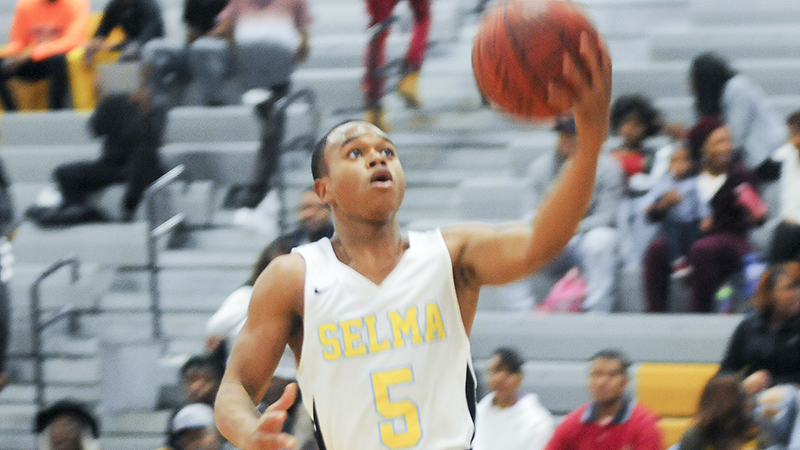 Selma’s James Anderson makes an easy layup after forcing a turnover. He led the Saints in scoring with 16 points in the 51-49 loss.

The Selma High boys basketball team fought their way back into the game Tuesday night against the Francis Marion Rams only to have the ball and the chance for a win stolen from them with a game-winning layup as time expired in a 51-49 loss.

Saints guard James Anderson tried to drive through the Rams defense with eight seconds left in regulation, but Tywayne Boswell stripped the ball away and scored on a fast break layup before the buzzer sounded off.

“We just had an unfortunate incident,” Selma boys head coach Ronald Lane said. “Great play by Francis Marion down there at the end.”

The costly turnover was the hiccup that disrupted an impressive comeback by Anderson and the Saints. After a rough first half where the team only scored 19 points, the boys raised their defensive intensity that yielded results on the offensive end.

Midway through the third quarter, Selma had to switch out of their zone defense because Rams guard David Jackson made three 3-pointers on consecutive possessions.

After Lane made the adjustment to a more aggressive man-to-man defense, the Rams didn’t make another 3-pointer for the rest of the night. The Saints also were able to force enough turnovers to create scoring opportunities for themselves.

“We tried to infuse some young guys in that we know can bring the intensity,” Lane said. “Good defenders, good athletes that we knew we could get some defensive pressure from. They really helped us turn [the game].”

The Saints outscored the Rams 18-15 in the third quarter, and entered fourth quarter only trailing 41-38. Missed free throws and layups at the rim were costly mistakes in the fourth quarter that impaired the Saints’ admirable rally. The team made 10 free throws on 21 attempts in the game and made just one of the four attempts in the final quarter.

Anderson, who led the team with 16 points, caught a Rams defender on a pump fake and stepped to the side to sink a three from the top of the key and cut the lead to 49-44 with 3:08 left.

“[Anderson’s] always been a big game player for a long time,” Lane said. “We expect him to make plays.”

Defensive traps led to turnovers that prevented the Rams from extending their lead in the last three minutes of the game. Romerit Nixon assisted Tyshawn Garner on the 3-pointer that tied the game at 49 with 1:23 left in the game.

Unfortunately, it just wasn’t enough in the end, and the Saints record dropped to 6-11 to start the second half of the season.

On the other hand, the Lady Saints earned a 54-30 victory Tuesday afternoon against the Rams. The Rams proved they were able to match the Lady Saints scoring in the first half, and went into halftime tied at 20.

The Saints were able to maintain their scoring pace throughout the remainder of the game and held Francis Marion to just 10 points in the second half.

“We were able to come back and put a little pressure on them,” Selma girls head coach Anthony Harris said. “We stole a few, layed it up and that was ball game.”

Na’quashia Smith led the Lady Saints in scoring with 13 points and Rodreckia Parker had 12. Kynadra Lewis nearly had a double-double with 10 points and eight steals.

Selma’s next game is on the road Friday, January 5 at Central Tuscaloosa at 5 p.m.
Other Scores

The Southside Lady Panthers dropped to 4-9 on the season after losing to Montgomery Academy 55-41 Tuesday afternoon.