Year in Review: Senators make playoffs for first time since 2011 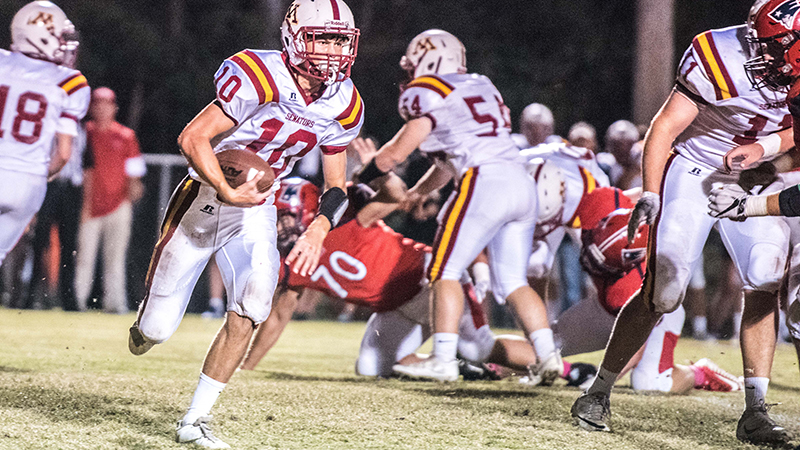 Hardin Utsey runs the ball during Morgan’s 21-14 win over Pike Liberal Arts this past November.

Editor’s Note: Through Jan. 1, the Times-Journal will look back on the top sports stories of 2017. Here’s the year in review for October-December:

The Southside High School volleyball team led the school in a canned food drive in honor of National Hunger Month. The team setup a competition among the different classrooms at the school to encourage as many students to contribute as much as they could. The donations were sent to The Christian Outreach Alliance, Inc., The Food Pantry, according to volleyball head coach Samantha Henry.

The Southside Panthers won their third overtime game of the season on a 10-yard sprint up the middle by the 2017 Selma Times-Journal’s Player of the Year Malik Johnson.

InShape Fitness owner David Johnson coordinated with his long-time friend and Southside girls basketball coach Rand Smith to donate weight room equipment to the school. According to the school’s principal Cedric Brown, the school was happy to receive the equipment and it will be available for all the athletic programs and school staff.

Morgan Academy advances to second round of playoffs

For the first time since 2011, the Morgan Academy Senators advanced to the second round of the playoffs after defeating the Glenwood Gators 21-14 on the road. The Senators lost in the second round to Monroe Academy, but at 6-6, they had their most successful season in six years.

The bi-annual reclassifications moved Dallas County and Keith into new classes for the 2018-19 school year. DCHS will move from 5A Region3 to 4A Region 3, and Keith dropped down from 2A Region4 to 1A Region3. Selma High remained in 6A, but was moved from Region4 to Region3.

Edward Moore Jr., a senior student-athlete at Southside High School, was burned trying to protect his younger brother from a kitchen fire earlier this month. Moore’s burns were treated at UAB. He had first and second-degree burns on up to 40 percent of his body, including the left side of his face. His family set up a GoFundMe page online to help him during his recovery.

The Selma girls and the Southside boys basketball teams won the Dallas County Schools basketball tournament earlier this month. The Lady Saints defeated Keith 54-38, and the Panthers defeated Selma High 53-43 to win the tournament of rivals.

2017 Volleyball Player of the Year

Morgan Academy’s Regan Hewitt was selected as The Selma Times-Journal’s 2017 volleyball Player of the Year. She was the outside and middle hitter for the Senators, and was voted by her teammates to be the team captain. Hewitt finished the season with 157 kills, 39 aces and 412 digs.

2017 Football Player of the Year

Southside High School’s Malik Johnson was named The Selma Times-Journal’s 2017 football Player of the Year. Johnson offensive impact helped lead the Panthers back to the playoffs this season. He was responsible for 29 total touchdowns as both a quarterback and a receiver. He passed for 745 yards, rushed for 675 and had 325 receiving yards.  He had 14 passing touchdowns, 11 rushing and four receiving touchdowns this season.

2017 Football Coach of the Year

Morgan Academy’s head football coach Josh Thacker was selected for The Selma Times Journal’s 2017 Coach of the Year. Thacker returned the Senators to the playoffs for the first time since 2011.

He led this year’s team to a 6-6 record and an appearance in the second round of the AISA playoffs. Two of his players were named to the AISA All-Star team.