Player of the Year: Malik Johnson made things happen all season long 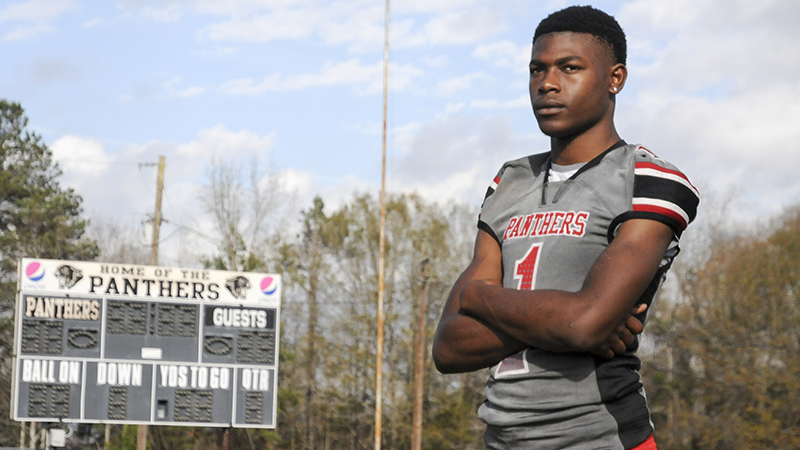 Southside junior Malik Johnson led his team back to the playoffs, which finished the season with a 7-4 record. He was responsible for 29 offensive touchdowns this year as a quarterback and wide receiver.

It was overtime during Southside’s homecoming game against Central Hayneville, and the Panthers needed one more score to break the 46-46 tie. With the game on the line in front of the biggest crowd Southside had seen all season, the voice of Curtis Williams shouted “He’s loose! He’s loose!” through the loud speakers as The Selma Times-Journal’s 2017 Player of the Year Malik Johnson sprinted 10-yards up the middle on a quarterback keeper to win the game.

“It means a lot,” Johnson said about the selection. “I worked hard through the season to pull through and play a long season. [The team] did a lot to accomplish their goal.”

The junior quarterback for Southside made drive-saving and game-winning plays like that all year long for the 7-4 Panthers. The Panthers survived three overtime games this past season, and made it to the playoffs in back-to-back years in large part due to Johnson’s ability to show up when his team needs him.

Whatever Southside needed, Johnson was ready to get the job done. As a quarterback, he threw for 745 yards and 14 touchdowns, while rushing for 675 yards and 11 touchdowns. Johnson also lined up as a wide receiver when necessary, and totaled 325 receiving yards and four touchdowns.

“We had other players that could do it too, but I just filled in where I was most needed at,” Johnson said. “Where I was needed at the most was to score touchdowns.”

Whether it was third-and-long or fourth-and-one, Southside knew they had a chance when Johnson had the ball. According to Johnson, Flowers’ favorite play to call was “make something happen.”

“Toward the last three or four games, I ain’t got to say nothing to Malik,” Flowers said. “It can be fourth down, and he doesn’t even have to come to the sideline because he knows what the play call is going to be. Fourth-and-one, Malik make something happen.”

The ‘make something happen,’ play call was also a staple in Flowers offense in 2016 when Johnson’s older brother DeQuan Johnson played for Southside.

DeQuan was last season’s Player of the Year, and Malik kept the honor within the family. DeQuan was a receiver for the Panthers, and score 27 touchdowns in his senior year. Malik finished his junior season with two more total touchdowns (29).

The two brothers are fierce competitors, but Malik said his brother, along with the rest of his family, was proud to hear the news of his accomplishment.

“They’re always competing with each other,” Flowers said. “It was good for Malik to have DeQuan as a brother, because there wasn’t a better person for him to learn from than him.”

Malik’s versatility on the field isn’t the only thing that is unique about him.

He’s a talented, 6-foot-3, two-sport varsity athlete with every reason to let everyone hear about it. Yet it’s almost impossible to get a word out of him. Especially when he’s the subject.

“You’re not going to get any words out of Malik,” Flowers said. “He likes to show you. He’ll smile at you. He might giggle for like three seconds every once in a while, but he’s not going to talk.”

That’s just the way he carries himself. He’s the strong, silent type. He just did what he had to do. He keeps his poise when the team is down by 14 or up by 20. He doesn’t have to yell or get over emotional to lead his team, because his teammates know what he’s about.

“Everybody likes him and respects him because of his game,” Flowers said. “He just goes out there to play, and they’re going to try to compete with Malik.”

The most exciting thing about Malik is that he gets to suit up again next year for the Panthers. Southside will get another season of exciting plays with Malik leading the offense during his senior year.

“I’m happy as hell to have him back next year,” Flowers said.

Malik has already gained some college interest from Alabama State University, where DeQuan is playing receiver. Flowers would love nothing more than to see both Johnson’s on the field for his alma mater.

Johnson said he got an offer from ASU after the game against Central, and he’d be happy to join his brother’s team in college. His family likes that plan too.

“They want me to go play with my brother now,” Malik said. “[Getting the offer] made me want to do better and grind harder.”

Next season, Williams will get to keep shouting his favorite phrase, “He’s loose!” for Malik’s senior year.

Congratulations to Malik Johnson on being named the Times-Journal’s Player of the Year.