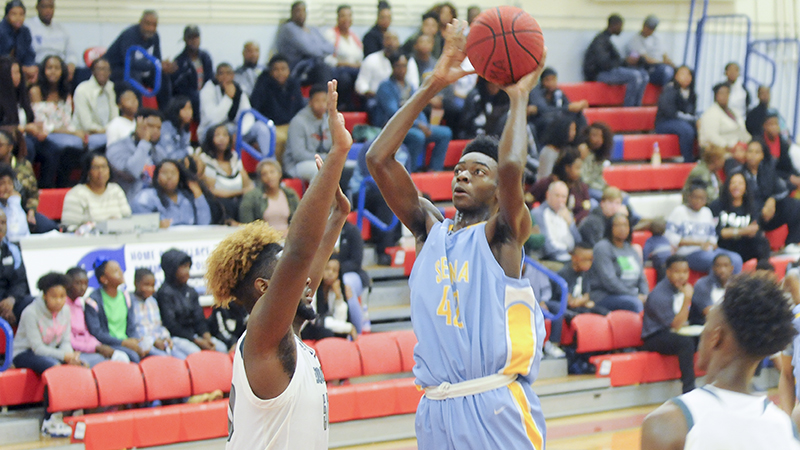 When these schools face each other, the competition level is higher, the physicality is heightened and the energy on the court spills over into the stands.

The first matchup of the tournament was a 3:30 p.m. game between the No. 9 Selma High Lady Saints and the Dallas County Lady Hornets. The two teams played before earlier this season, and once again Selma won by a large margin.

The team got the lead early, and Dallas County was just unable to keep up with their fast pace. By Lady Saints head coach Anthony Harris’ standards, his team started slow, but finished the game strong.

“We played sluggish the first quarter, but other than that we picked it up,” he said.

Turnovers and limited offensive chances hurt the Lady Hornets’ ability to score in this game. Dallas County struggles when its best player, Ebony Simmons is unable to put up big numbers.

They trailed 19-7 after the first quarter ended, and were held under five points in each of the remaining quarters. Simmons and Sherilyn Briggins were the top scorers for the Lady Hornets, scoring five points each.

The Lady Saints will advance to the championship match Friday night against Keith at 6:30 p.m. at WCCS.

The Selma High boys team also won their re-match against Dallas County 63-58, but it was a much tighter ball game. Hornets forward Chance Lee beat his man to the rim for a lay-up in traffic as time expired to send the game to overtime.

“We had been in control of the game for most of it,” Selma head coach Ronald Lane said. “We just needed to step our intensity up on defense.”

The Saints and the Hornets battled each other back-and-forth in each quarter. The two teams traded scoring runs, and never let the other get too far ahead.

Only the first quarter and overtime periods didn’t end with a buzzer beater.

Selma guard James Anderson, who finished the game with 14 points, hit a jump shot from the elbow at the buzzer to give his team a 25-23 lead at halftime. Tyshawn Garner made a three from the corner to give Selma a 39-37 lead at the end of the third quarter.

The turning point of the game came in overtime, when one of Dallas County’s leading scorers Kendall Thomas fouled out. Thomas had 16 points before he had to exit the game, and the Hornets struggled to keep up with the Saints without him.

Anderson hit a big three-pointer with 1:30 left in the game to give the Saints some space, and Dallas County was forced to foul the rest of the way. A couple extra free throws was all Selma needed to advance to Friday’s championship game.

“I think tonight we played better team basketball than we’ve been playing,” Lane said. “I think the confidence level is up. When we play together, we’ll be fine.”

The Keith Lady Bears defeated the Southside Lady Panthers 52-42 in the third game of the night.

“We started off slow defensively and offensively, but we kind of picked it up,” Lady Bears head coach Cecil Williams said. “We played better when I put a different group in to kind of push them a little bit.”

According to Williams, Shatavia Moore and Ambreya Snow played well for the Lady Bears.

This was the Lady Panthers second loss to Keith this season, but they scored more in this game than in their first meeting. Kylan Brown led Southside with 14 points and Destiny Davis had 13.

The night was capped off by a close finish in the Keith versus Southside boys game. The Panthers defeated last year’s Dallas County Schools Tournament champion in the final seconds of the game.

The Panthers were led in scoring by guards MarKendrick Williams with 18 points and Derrick Griffin, who had 15.

The Bears had a chance to stay in the game at the free throw line with less than five seconds on the clock, but were unable to make them.

“Southside came out and played harder than us tonight,” Keith head coach Clifton Reeves said. “They played like they really wanted to beat Keith. We had a chance to tie the game and shoot free throws. We just didn’t play well. We didn’t play Keith basketball.”

Dallas County will match up with Keith on Friday, and the Panthers will take on the Saints for the championship game.