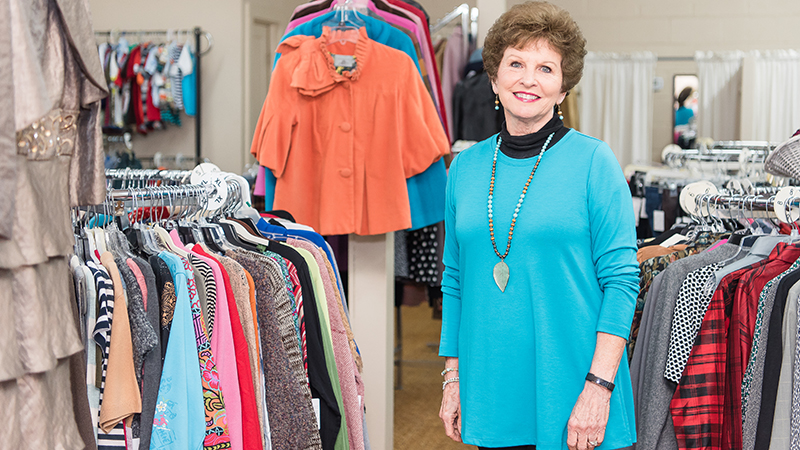 Peggy Williamson opened The Clothes Line in July of 1982 with a $200 loan from her father. (Photo by Ashley Mason)

When Peggy Williamson opened her own consignment shop, the Clothes Line, in July of 1982, she never imagined the store would still be open 35 years later.

The store, which carries ladies and children’s name brand clothing, sits just off of Highland Avenue tucked away between the Stereo Shop and Mr. Waffle.

“I really did not,” Williamson said from behind the counter. “I envisioned that I would do that until my children got out of school, that I would be helping with that aspect of it financially until they got out of college, but by then I just enjoyed it. It just became a part of what I did.”

The mother of three decided to open the store as a way to help out financially.

“We’ve got three children, and at that time my youngest was in the second grade, and I just felt like I needed to do something to help contribute financially with all the activities and all that the three children were doing in school,” she said.

Her husband, Cecil Williamson, who is a minister and former Selma City Councilman, was a bit surprised at the endeavor.

“I think he was a little surprised when it took off and made a go of it, but he was supportive of me,” she said.

With some rearranging of carpools for the children, she made it work.

“I was at work in the afternoon when the children got out, so we would swap up with friends where I would take them in the morning or he could pick up in the afternoon,” she said. “Being a minister, he could break away to go pick up a carpool.”

Williamson said she got the idea of opening a consignment shop from visiting others.

Because a consignment shop is different than a department store or a thrift store, the idea stuck with her.

“I was intrigued by that whole aspect, and I just started thinking I could do that too. I thought that I had enough contacts to get it started, to get it going, and then it just kind of grew from that,” she said.

Williamson said she had plenty of friends that had ladies’ and children’s clothes to help fill the racks, so she had no problem getting started.

“I just decided I’d step out on faith and see how it would work,” she said. “The rest is history.”

The shop first opened at a location on Dawson Avenue, but she quickly outgrew it once she got everything figured out and running the way she wanted it to.

“I was there for about 18 months. I just outgrew it right away, and I’ve been here ever since,” Williamson said. “I borrowed $200 from my father to start the business, and I paid him back the next month, and I thought, ‘Well, this is okay. This is going to work.’”

And it still is.

Williamson said shopping has changed a bit over the years with the Internet, but people still love to come check out what is new on the racks.

“The internet and online shopping has really changed the way people shop now,” she said. “However, people do still like a brick and mortar building that they can come in and touch it, feel it and see what they’re getting.”

One of the unique things about the Clothes Line is that there is a constant flow of new clothing coming in because it is a consignment shop, and the pieces are unique because there is usually only one of them.

“It’s always changing,” she said. “You might come in one week, and there’s not a thing you need. The next week, lots has come in in the sizes you need.”

The way the store works is people call to set up an appointment. They bring in their clothes they want to sell, and Williamson goes through them and decides which ones she thinks will sell.

When the clothes are purchased, the store gets half, and the person that brought it in gets half.

“Over the years, I’ve kind of been able to tell what people are going to like, what they enjoy wearing and the type of things that they need,” she said.

“It’s something that you can do with them to repurpose them or recycle so to speak. So, you’re helping someone else out but you are also helping yourself out.”

Some clothes are worn and some are brand new that have been hanging in a closet.

“I get a lot of things that are new with the tag because people buy things, get it for gifts or whatever and can’t take it back,” she said. “It doesn’t do for them, which doesn’t mean it doesn’t do for somebody else.”

“You can get it for a fourth to a third of the original price. I get a lot of things that you can’t get just everywhere,” Williamson said. “I have some unusual things, and so people like that they have something a little different and can get something that’s really nice that normally they might not be able to afford.”

Being in business for 35 years has allowed her to meet a lot of new people and develop relationships with her customers, which is what Williamson loves about the shop.

“I love my customers. I’ve got people now that came with their mothers when they were children that now are bringing in their children. It’s just so fun. It’s fun to see the progression of that and how that has evolved over the years,” she said.

“I’ve seen them grow up and get married and have children. I’ve rejoiced with them and grieved with them in sadness and in death. You just get really close to your customers.”

With three and a half decades of running the shop, Williamson said she owes it all to her customers that continue to suppprt the Clothes Line.

“It means a lot to me that the people have supported me for all that time because businesses do come and go,” she said. “I did not envision still doing this, but it’s been great. It really has.”

The store is open Wednesday through Saturday from 10 a.m. to 4 p.m. and is located at 1514 West Highland Avenue.