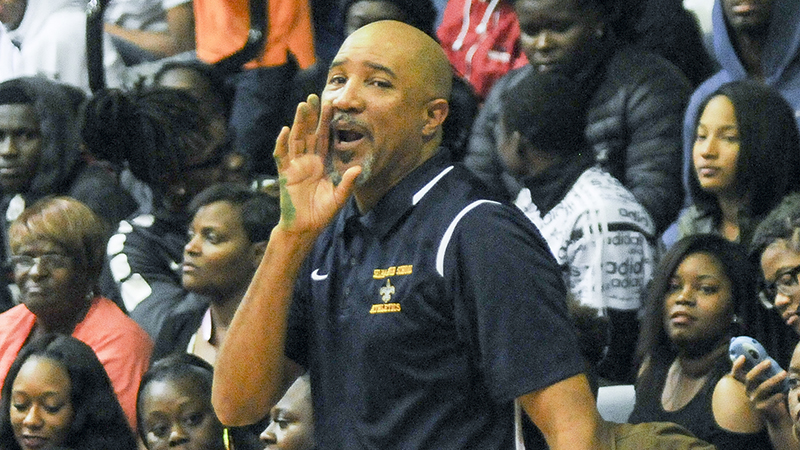 Selma High head coach Ronald Lane shouts out a play to his defense after a score against Keith. Lane asked Santa to re-ignite the school spirit in the community for his players and Selma High athletics.

The high school basketball teams have reached the midway point in their seasons, and it’s been an exciting ride so far. Between the dunks, alley-oops and comeback victories, the level of excitement is increasing with every game.

Like many of the kids sending letters to the North Pole, several of the basketball coaches in the area have a few wishes they’d like jolly old St. Nick to bring to their programs.

Selma High head coach Ronald Lane’s wish reaches beyond the court, but into the school and the community.

“If he could bring the school pride back that used to permeate throughout Selma High School and the community,” Lane said. “I think that would be infectious with all of our sports programs, especially basketball.”

It’s been Lane’s goal to return Selma boys basketball back to its prime since he took over the head coaching job last season. Hopefully, Santa will send him an assist and motivate the student body, community and basketball fans to fill up the gym for Saints basketball.

Ellwood Christian’s head coach Willie Shears’ wish for Santa also looks towards the bigger picture. The No. 10 Eagles are one of the most complete teams in the area, but Shears believes his players have much more to give.

“I would ask Santa, if it was in any way possible, if he could open up every player’s mind and allow them to be able to see that they have the opportunity to do something big,” Shears said. “Allow them to see how good they could really be if they totally give it their all on and off the court.”

The Eagles have been playing strong basketball this season, and their roster is loaded with talent. If Santa can tap into the extra potential that Shears sees in his team, then this unit can really do some damage.

Keith head coach Clifton Reeves is wishing that his 7-2 Bears can maintain their high level of play for the second half of the season. As the No. 6 team in Class 2A, the Bears seem to have the pieces they need to have a successful season.

“Sometimes we can lose our composure and get caught up in the crowd or the moment of the game,” Reeves said. “If we can keep our composure, then that’ll help us out a lot during the season.”

Dallas County head coach Cliff Nix is hoping Santa can bring more consistency to his team. Nix has seen flashes of good basketball from his Hornets basketball team, but the players haven’t quite managed to put together a complete ball game.

“I’d ask for the team to gel in 2018,” Nix said. “We’re going to be starting a lot of area play and getting ready for the area tournament, so it’s important to be playing on the right track.”

Similarly, coach Lenord Jones at Southside is hoping Santa will bring his team together as a unit.

“They got off-course, and started playing as individuals,” he said. “We’re almost there. We’re trying to play as a family again.”

On a more serious note, Morgan Academy head coach Mark Knight had the biggest wish for Santa this year. The Senators, who are 7-3 this season, have to finish the season without Mason Perkins and the team’s best player Gunnar Henderson.

“I’d like for us to be healthy, because I think we would be as good as anybody in 3A this year if we had everybody,” Knight said. “I probably lost 30 points and 20 rebounds a game with those two out. We’re just going to have to play better as a team and cut down on turnovers.”

The wish list is complete, and Santa will soon be on his way. Hopefully, the coaches have been good this year. But leaving out a plate of milk and cookies certainly wouldn’t hurt their chances at getting their Christmas wishes.