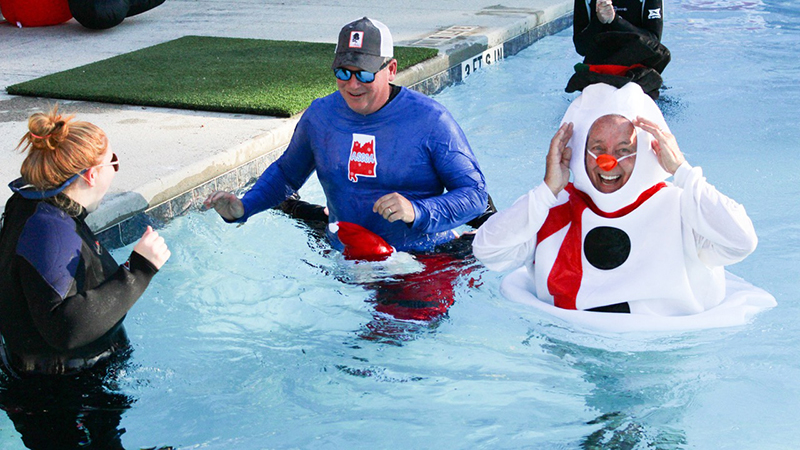 Jumping into 40-degree water doesn’t sound like much fun to many people, but for Selma Rotarian Bob Kelley, it’s something he’d do again in a heartbeat.

For the last two years, Kelley has watched others take part in the Camp ASCCA (Alabama’s Special Camp for Children and Adults) Jingle Jump, which raises money to pay for campers to attend.

“This is our third year at Camp ASCCA to do it, and I’ve watched it two years, I thought well, why shouldn’t I get some of the fun,” Kelley said.

And jump he did. Kelley, who is vice chair on the Camp ASCCA Board of Directors, took the icy, cold plunge Saturday.

“The last two years, the water was a lot warmer. The first year they froze a bunch of buckets of water in their freezer and dumped it into the pool so it would be colder,” Kelley said. “Saturday, it was so numbing cold. My teeth were chattering, and I could hardly move.”

“We’d already put a thermometer in the water, so we knew it was 40 degrees,” he said. “And of course, I couldn’t imagine what that feels like because I’ve never been in 40-degree water before.”

He didn’t have to imagine any more. A few minutes later, with the outside of the pool lined with campers cheering them on and other jumpers dressed in costume, Kelley jumped right in.

“When I hit that water it was like goodness gracious,” he laughed. “I started looking for the ladder.”

He made it out of the pool, but he was still freezing cold because of the snowman costume he had on.

“It must have held half the pool because I was standing outside of the water, and I was still freezing as much as I was when I was in the water,” he said. “I was heading to the changing room taking it off just as fast as I could.”

Jumpers were asked to raise at least $725 by getting sponsorships, but Kelley exceeded his goal. He was able to raise $1,100. Overall, Kelley said the Jingle Jump raised around $43,000.

“We thought we’d raise maybe three or four thousands dollars by doing this Jingle Jump, and we got ten fold,” Kelley said.

He said he fell in love with Camp ASCCA nearly 20 years ago, and he’s been going to it ever since for different Rotary Club events. The camp offers therapeutic recreation for children and adults with mental and physical disabilities.