Southside unable to get home wins against Selma High 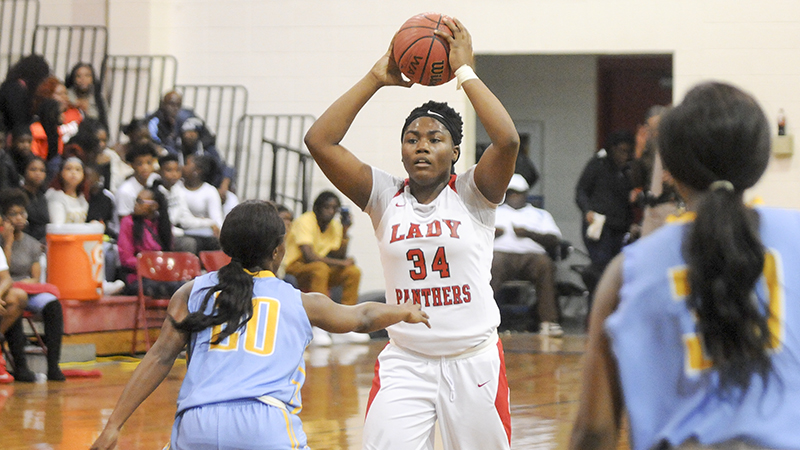 Southside guard Destiny Davis looks for a teammate while guarded by Selma High guard Kynadra Lewis. The Lady Panthers were within four points of the Lady Saints at halftime, but lost the game 60-29.

The Saints marched into Southside High School Friday night, and both the boys and girls basketball teams came out victorious.

A second half surge allowed the No. 9 Lady Saints to defeat the Lady Panthers 60-29, and the boys grinded their way to a 62-54 win.

Early in the girls game, the Lady Panthers were able to go toe-to-toe with the girls from Selma High. Selma started the first quarter strong with 20 points, but were held to just four points in the second quarter.

The Lady Panthers were only able to get seven points in the first quarter, but they went on an impressive scoring run in the second quarter led by guard Christina Watts to finish the half only down by four.

“[Watts] started it on the offensive end, but it really started on the defensive end,” Lady Panthers head coach Rand Smith said. “The defense is what really changed. Rebounding limited [Selma] to one shot, and then she started knocking down shots to get us right back in it.”

“We had a good first quarter, but the second quarter it seemed like we just stopped scoring,” Lady Saints head coach Anthony Harris said. “We wouldn’t go to the basket.”

Unfortunately for the Lady Panthers, the momentum didn’t carry through halftime. They were down 24-20 at the start of the third quarter, but by the end of it they trailed 45-25. The Lady Saints pressure defense forced turnovers that they were able to capitalize on.

“They play pretty good ball when I turn them loose defensive wise,” Harris said. “We turned it up a little bit, and we didn’t look back.”

Ta’Sharri Grimes led the Lady Saints with 18 points, and Roderckia Parker had 13. The team had their best quarter in the third quarter when they scored 21 points.

The Lady Panthers were out of gas in the second half, and only scored nine points after halftime. Watts finished the game with 17 points.

“We just have to give a lot of credit to Selma High,” Smith said. “They’re a great team, and we hung with them for a little while. I’m proud of my girls. They didn’t quit.”

The Southside boys, however, had their troubles early and spent the second half playing catch-up to the Saints.

At the end of the first quarter, the Saints only had a 14-11 lead. The Saints applied more pressure in the second quarter, which caused the Panthers to make bad passes and turn the ball over. Selma was able to convert on its extra chance opportunities, but the Panthers failed to capitalize on theirs.

“I think we maintained our intensity for most of the game,” Selma head coach Ronald Lane said. “I think that was the difference.”

Only nine of their 22 first half points were from field goals. Without the 13 made free throws, the Panthers could’ve been in a much deeper hole.

“They were just frustrated in a tight game,” Southside head coach Lenord Jones said. “A lot of turnovers and missed layups that kind of hurt us tonight. I think if we capitalize on some of those turnovers and layups, then we could’ve won it.”

The Panthers shot much better in the third quarter. It was the first frame in which they were able to outscore the Saints. Keshawn Arrington hit two big three-pointers to help get his team back in the game.

This past Tuesday, the Saints lost in overtime to Chilton County 74-65 in a game where they were leading going into the fourth quarter. They didn’t want a repeat of that game, but Southside wasn’t giving in.

“Southside is well-coached. Coach Jones is a good coach and has great athletes,” Lane said. “They shot their way back in it. They made some adjustments, and we tried to stymie what they were doing. They were successful, but we made the plays at the end that got us over the top.”

Selma had three players reach double-digits in points. James Anderson and Gernard Brown led the team with 12 points, and Korbyn Kelly finished with 11.

“I think all the seniors played well. We had a few guys come off the bench that played well too,” Lane said. “I got to give my hats off to James Anderson, Chris Carter and big guy “Stack” Brown. Brown stepped up tonight.”

Unfortunately for the Panthers, their leading scorer Derrick Griffin (18) caught a leg cramp in his left calf 30 seconds into the fourth quarter.

The team still fought to get within four points of the lead with a minute left, but the Saints made it too difficult to get an easy shot.

“Everybody played pretty good in the second half,” Jones said. “But I think we went down when Derrick Griffin went down.”

The Panthers next game will be Thursday, Dec. 21 in the Dallas County Schools Tournament at Wallace Community College Selma, and Selma High’s next game is at home against Keith on Saturday, Dec. 16.