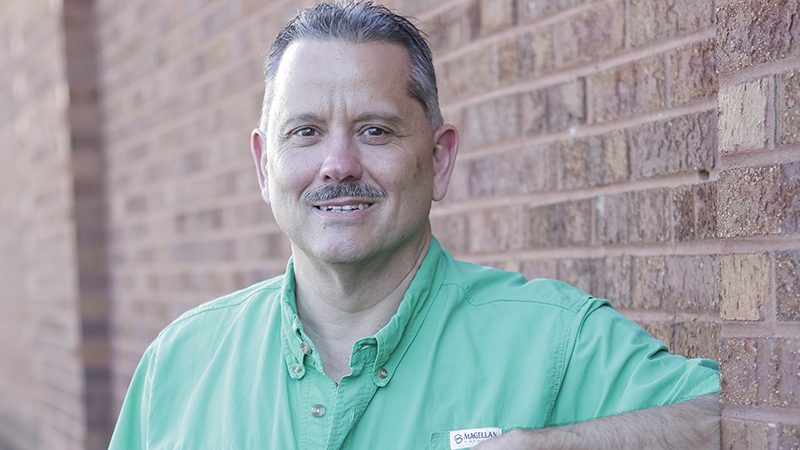 Dallas County is mourning the loss of one of its highest ranked law enforcement officers and an even better man.

Chief Deputy Randy Pugh, second-in-command at the Dallas County Sheriff’s Department, passed away suddenly at his home Thursday evening at the age of 55.

“There won’t be another Chief Pugh. I can tell you that,” said Capt. Mike Granthum with the Dallas County Sheriff’s Department. “The experience he brought here, you can’t replace it.”

Pugh has been with the department with the exception of a few years since he graduated from Southside High School in 1980. He worked his way up the ranks and was eventually named chief deputy by former Sheriff Cotton Nichols. Sheriff Harris Huffman took office in 1995 and kept Pugh as the chief deputy.

“He was my right hand,” Huffman said. “Randy was the go-to guy.”

Huffman never worried about the department when he was out of town because of the trust he had in Pugh.

“If I left town for any length of time, I wasn’t afraid about the sheriff’s office because I knew that Randy would always make the right decisions,” Huffman said Friday. “You could trust him.”

Pugh served as a mentor for many within the department.

“He was someone that took me under his wing,” Granthum said. “I knew the police part up and down, but he taught me about the administrative part and how to talk to people.”

Granthum said Pugh truly cared about the employees at the sheriff’s office.

“If you look up boss in the dictionary, you would see his name beside it. He’s just a good guy,” he said.

Pugh was more than just a good boss though. He was also a good role model.

“He was a good man,” said Capt. Roy Freine. “He taught me how to be a father. He helped me raise my children.”

People that knew Pugh said his biggest hobby was his family.

“He was family oriented,” Huffman said. “That’s all we talked about from time to time, was family, our kids.”

“His family meant more to him than anything, and he demonstrated that daily,” Freine said.

A memory several in the department shared is playing volleyball at law enforcement conferences.

“We always had a two or three-hour break, and instead of going out to eat or whatever like most of the guys did, we would always go out and do volleyball,” Granthum said. “And he didn’t do it necessarily to win or lose, it was just to bring the guys together.”

In an interview last January for the Times-Journal’s First Responder of the Week, Pugh said the department was like family.

“I love the guys I work with. They make me, I don’t make them. I’ve got some great people working here. We’re a family up here,” he said in the interview.

Lt. John Hatfield worked alongside Pugh, but he was also very close to him outside of the office.

“He is unreplaceable as far as an employer, and even more so as a friend. It’s going to be rough,” Hatfield said Friday. “We coached softball together, our kids grew up around each other and we vacationed together.”

“As his pastor over the last couple of years he’s been very faithful to our congregation,” said pastor Cory Horton, who also serves as the department’s chaplain. “It’s been neat to see him afresh to the lord. He’s been diligently reading through his Bible on kind of a yearly Bible plan.”

Pugh had a love for helping people, whether it be victims in a crime or his next-door neighbor.

“I had stayed at the office too late last Friday when we had the snowstorm, and Randy called to warn me about the roads being impassable. He knew I oftentimes work late at my office, told me he’d see that I got home, to call him when I got to the entrance of our neighborhood,” Davis said.

“He came to my rescue with his utility vehicle, drove me home that night. He and another neighbor spent Friday evening pulling vehicles out of ditches on our road. Like a shepherd tending his flock, Randy took care of me, just as he’s done many, many times with many other people. Randy truly cared about his fellowman. He wasn’t just a neighbor; he was a man I considered to be my friend and I’m going to miss him very much.”

Huffman said both he and Pugh were planning on retiring in January 2019.

“You can always replace a position, but you can never replace the person,” Huffman said.

“There’s nobody up here that could take Randy’s place.”

Funeral services are planned for Monday, Dec. 18 at 11 a.m. at Elkdale Baptist Church. Visitation will be held Sunday, Dec. 17 from 5-7 p.m. at Lawrence Brown-Service Funeral Home.