No. 10 Ellwood Christian’s offense too much for Linden 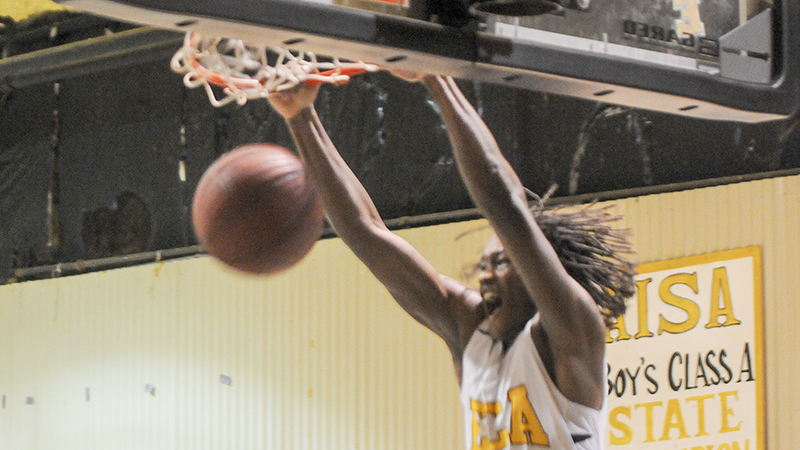 Ellwood Christian forward Loveless Craig slams in a dunk after getting a steal late in the 61-49 win over the Linden Patriots on Thursday night. Craig finished the game with 12 points and two blocks.

The No. 10 Ellwood Christian Eagles were 100 percent dialed in during their 61-49 win over the Linden Patriots Thursday night.

Ellwood spread out the scoring and had three players finish in double digits. Sophomore Justin Bufford led the team with 13 points, while Loveless Craig and Joseph Mahone each had 12.

“We made some adjustments because we knew that Linden would most likely come out and play a zone,” Ellwood head coach Willie Shears said. “We switched the lineup just a little bit. I put Justin Bufford at the point so he could facilitate, and then we put some shooters in places where they could knock down some shots.”

The Eagles took advantage of Linden’s zone defense, and rained six three’s on them in the first half.

The Patriots tried to work inside, but Craig, Bufford and Ja’Mel Phillips were always nearby to protect the rim. Each of them got a block in the first half, and forced Linden to settle for perimeter shots the remainder of the night.

To cap off a 22-point second quarter, Bufford turned a steal into a roaring two-handed dunk that gave Ellwood a 36-17 lead at halftime.

Ellwood slowed down the pace in the second half since they had the game under control.

The dip in scoring in the third quarter was primarily because the Ellwood guards spent the majority of the time stalling to run down the clock.

“I told the guys in the locker room that average teams, when they get a big lead, they lose it because it’s hard to handle success,” Shears said. “Good teams are able to maintain a lead. Basically, we were just trying to pick our shots, make good shots and we did pretty well with it for the most part.”

The home crowd did get hyped up when Craig caught an inbound alley-oop pass over multiple Patriots defenders.

The Patriots had their best offensive stretch in the third quarter when their outside shooting improved. Linden made four three-pointers in the quarter, but were still down 49-34 going into the final quarter.

The Eagles defense was less aggressive in the fourth quarter, and allowed several easy layups while trying not to foul. The Patriots showed signs of a rally, but were never able to get closer than within 10 points of the lead.

Ellwood improved to 5-2 on the season, and will travel to Birmingham on Friday for the Altamont tournament.