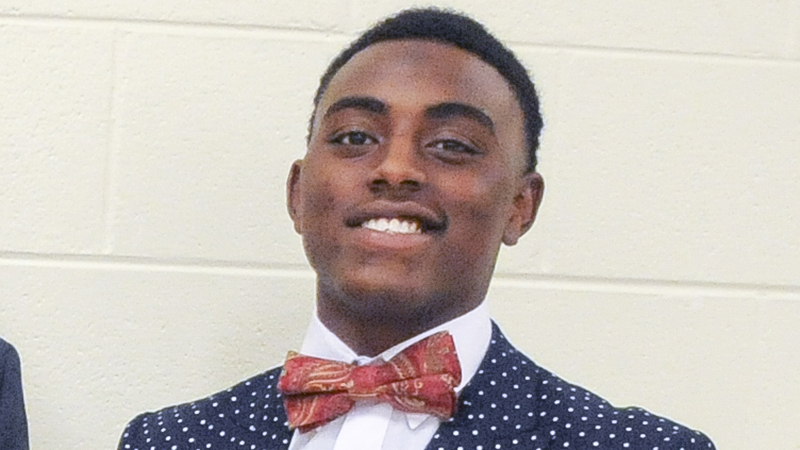 Southside senior Edward Moore Jr.. earned the Selma QB Club scholarship this past November. He sustained first and second degree burns from a kitchen fire at his home this past Thursday.

Southside High School student-athlete Edward Moore Jr.,17, was just getting out of the shower late Thursday night when he heard his younger brother Kristan Moore yell from the kitchen. Kristan, 10, was trying to extinguish a grease fire on the stove by throwing water on it.

Immediately going into protection mode, Edward told Kristan to move away while he handled the fire. As he tried to get the flaming pan out of the house, Edward dropped it and the hot grease burned him.

“I was trying to put it down and I kind of dropped it,” he said. “I pushed [Kristan] out the way and that’s when the blaze came up and caught me in my face.”

The fire occurred late Thursday night around between 11 p.m. and midnight. Edward doesn’t remember hearing the smoke detectors go off, but he believes it was because the fire hadn’t generated enough smoke to trigger it before he stepped in.

“That’s the crazy part, because we didn’t hear the fire alarm at first,” he said. “I’m guessing it didn’t go off because it wasn’t really smoky until I picked it up, and that’s when the smoke really started to come.”

His chief concern, was the safety of his younger brother and the rest of his family.

“I’m happy he’s alright and he didn’t get burned,” Edward said. “We still have our house, so other than that I’m fine.”

According to Edward, Kristan took the accident pretty hard. Edward said he told his brother that he was going to be ok and used it as a teaching moment for fire safety.

“He’s a kid, so I wasn’t going to get mad at him or nothing like that,” he said. “I just told him that I’d rather it be me than you anyway. He took it pretty hard, but I told him it’s going to be OK.”

Fine is a brave assessment after receiving direct burn damage. According to his GoFundMe page, Edward suffered first and second degree burns to 40 percent of his body, including the left side of his face.

“It didn’t really start hurting for real until my mom put me in the shower,” Edward said. “It hurt worse, but as I sat in there for a few minutes and she put layers of wet towels on me it felt better after that.”

He was taken from his home to Baptist South in Montgomery immediately after the fire, and then transferred to UAB which has a burn unit. According to Edward the EMT that was assisting him on his way to the hospital was shocked because of how calm he was. Edward said the burning sensation was reduced by the time he got to Montgomery, and at that point he just wanted to sleep. Once he was at UAB, they were able to start removing the dead skin and treating Edward’s wounds.

“The nurse kept asking me if I was hurt when she was doing it, but I told her it tickled,” Edward said. “She looked at me and thought I was joking, because she said that every patient she had would be yelling and screaming. She told me I was a trooper to just sit there.”

One reason that Edward wasn’t as bothered by his burns, was because he was thinking about the ACT exam he was scheduled to take the next day. Coincidentally, it was canceled due to last weekend’s snowy weather, but Edward’s focus was on his future and not his current situation.

“I was so serious. I was so focused on tacking this ACT test, and I have a senior bowl coming up this January that I want to play in,” he said. “I’m not going to let this stop me from doing that. It’s just a little step in the way that I’ve got to get over, but that’s what was really on my mind. When I was going to get out and stuff like that.”

Edward returned home Tuesday, and is still in the process of recovering. His head football coach Daniel Flowers has checked on him every day since the accident. Edward played safety for the Panthers, and was a leader both on and off the field.

Not only did he help his team make it to the playoffs for the second season in a row, but he was also a Selma QB club scholarship recipient. His dream school is Tuskegee University, and wants to own his own electrical company one day.

Southside coaches Jonathan Jenkins and Rand Smith brought snacks for him and gave him encouraging words while he rested.  Dallas County Schools superintendent visited Edward and his mom at the hospital as well.

“[Flowers] has been calling me every day since he heard about it,” Edward said. “The support has been very tremendous. I’ve been getting a lot of phone calls from a lot of different people just making sure I’m okay and to motivate me to focus on getting better.”

Edward played safety for the Southside Panthers and Flowers said it felt like it was one of his kids in the hospital.

“Everybody knows already, I almost treat him like my son and it hurts to see him like that” Flowers said. “He’s got a lot going for him, and it almost got taken from him.”

In order to help out Edward and his family, Southside High School began taking up donations for him. The family setup a GoFundMe page at www.gofundme.com/edward-moore-jr-severly-burned in order to raise money to help them get through this difficult time.