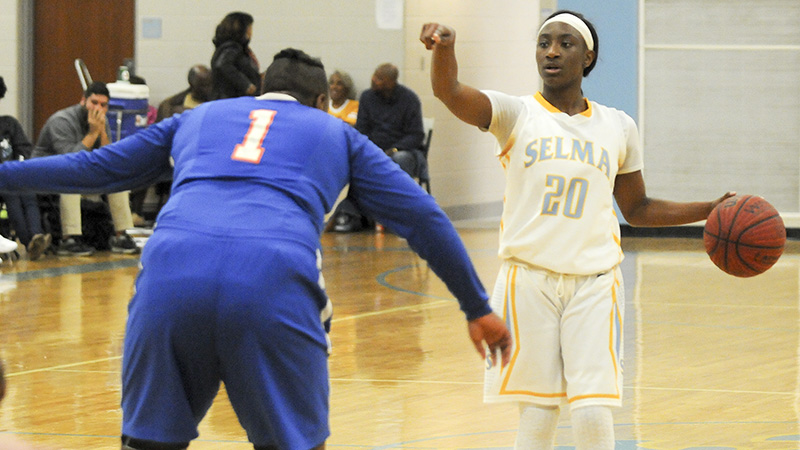 Selma High guard Kynadra Lewis sets up the offense in the 50-34 win over Chilton County on Tuesday night. Lewis led the team in scoring with 15 points in the first area game of the season.

Selma High School basketball was back in action against the first area opponent of the season in Chilton County on Tuesday night after a week-long break. The Lady Saints secured a 50-34 win, but the boy’s team lost 74-65 in overtime.

Despite the win, Lady Saints head coach Anthony Harris thought his team’s chemistry was off after not having played in seven days.

“Overall, in spurts we looked like Selma High,” he said. “We played better the first five games, but we did enough to win.”

The Lady Saints had two players finish in double figures in guard Kynadra Lewis and Rodreckia Parker. Lewis led the team with 15 points and Parker had 10. Forward Aaliyah Hatcher scored nine points before the fourth quarter, but ended up fouling out of the game before she could also get into double-digit scoring.

“Our defense was a little shaky,” Harris said. “It was just a sluggish ball game. My hat goes off to Chilton County. We played sloppy, and I’ll say it again, the chemistry was a little bit off.”

Fortunately for the Lady Saints, they were able to pick themselves up and take control of the fourth quarter. In the final quarter, Selma High outscored Chilton County 11-4.

“We got a couple of easy baskets and got back in transition,” Harris said. “With Hatcher out, I knew we were going to hurt a little bit on the block, but overall I’m glad with a win.”

On the other hand, the boy’s team lost control of a game that was within their grasp. The Saints had a 28-19 lead going into halftime, but Chilton County was able to rally themselves back into the game.

J.D. Whitlock led Selma with a 17-point night, and James Anderson III had 12.

Chilton County outscored the Saints 19-14 in the third quarter, but Selma still had a 42-38 lead to start the fourth quarter. Selma High needed a corner three from Michael Harris with 30 seconds left to take a late lead.

“[Harris] is a young kid, but we know he’s a good shooter,” Lane said. “He got us back where we needed to be. A couple free throws here and there, and we probably could’ve pulled it out in regulation, but that’s the name of the game.”

That three-pointer would have been the game-winner, but Chilton was able to work inside on an inbound play to tie the game. Harris had one more chance to ice the game at the free throw line with less than 5 seconds left in regulation, but he missed both of them.

Both teams suffered from costly turnovers and poor ball security, but Chilton was able to take advantage of their free throw opportunities.

“If you don’t make them from the foul stripe at home when you’ve got that opportunity to seal the game, it’ll come back to get you and that’s what happened tonight.”