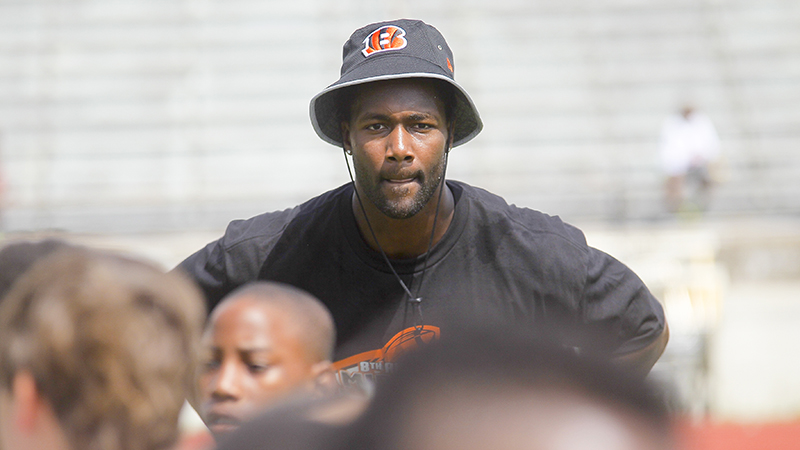 Selma native Michael Johnson has been nominated for the 2017 Walter Payton Man of the Year Award.

People in Selma have known for years how much Cincinnati Bengals defensive end Michael Johnson loves giving back to his community, but now the NFL has taken notice.

Johnson, a nine-year veteran of the league, was nominated by the Bengals for the 2017 Walter Payton NFL Man of the Year Award.

“I’m proud and extremely humbled to be nominated as the 2017 Walter Payton Man of the Year,” Johnson said in a video posted on the Bengal’s Twitter. “Everywhere I go I try my best to represent my family, my home and my team. This is truly an honor.”

All 32 teams in the NFL nominate a team member, and this year the Bengals nominated Johnson for the work he does in Cincinnati and when he comes home to Selma.

“Michael never hesitates to step up,” said Cincinnati Bengals head coach Marvin Lewis in a press release from the team. “He feels the need and passion to go over and above to mentor and support our young people. He is a role model on and off the field.”

Thomasene, Johnson’s mother who helps him run the MJ 93-90 Fund, said it was a proud moment to see her son recognized for his big heart.

“I got all excited, “she said. “I wanted to hug him and just tell him how proud I was, so I sent him a text the moment I heard it and told him how much I loved him and how proud I was and that he was really making a difference.”

Thomasene said Johnson has always had a heart for helping others.

“He’s been that way since he was a little boy,” she said. “He’s just always had a heart to help and he’s watched us too. He’s watched his dad, who is a very giving person. He’s always doing something for somebody, so he has seen it all his life.”

While Michael’s mother and his father, Sam, may have been his role model growing up, Thomasene said the roles have been reversed.

Johnson launched the MJ 93-90 Fund his rookie season in the NFL after being drafted in the third round by the Bengals from Georgia Tech. The mission of the fund is to teach children about using their talents, nutrition and exercise and to mentor children and encourage them to be successful. Each year, Johnson and his foundation takes part in a number of different projects in Selma, including the annual football and cheer camp, a family fun day and a veteran’s breakfast. Johnson has also helped fund a computer lab at Martin Middle School, helped the Selma Fire Department’s fire prevention program purchase an interactive, remote control firetruck and the list goes on.

In Cincinnati, Johnson has started a program to strengthen the relationship between police officers and children.

“That’s his heart, to give and to make a difference. That’s what we really want to do, make a positive difference,” Thomasene said. “He is just doing so wonderful, and it just shows that he really does love his city, wherever he is, and the children in it.”

Thomasene said the community can also help Michael win the award by voting for him on social media in the Man of the Year Charity Challenge.

The winner of the Man of the Year Award will be announced on Feb. 3, the day before Super Bowl LII, at NFL Honors, a two-hour primetime awards special on NBC.