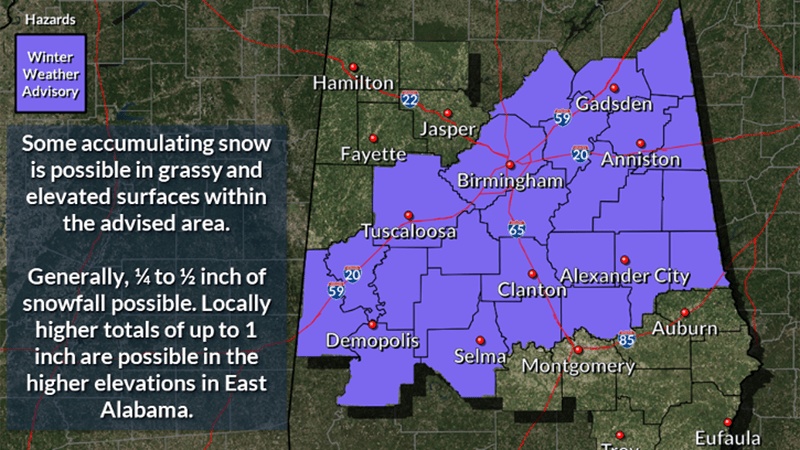 The National Weather Service in Birmingham has placed Selma under a winter weather advisory for Friday for a possibility of snow.

Selma is forecast to have a mix of rain and snow in the early morning hours and a possibility of snow between 10 a.m. and 2 p.m.

“Late morning between 9 a.m. and noon, we could start to see maybe a mixture of some rain and snow,” said Mark Rose, a meteorologist with the National Weather Service in Birmingham.

“It’s primarily going to stay a mixture of rain and snow, but it could briefly change over to all snow for a few hours in the afternoon.”

Rose said there won’t be much of an accumulation because temperatures during those hours will remain above freezing. He said Selma can expect half of an inch at the most.

“Anything that falls will melt, but you could see some accumulations on car tops, grassy areas and things like that of maybe half an inch,” Rose said.

Forecasts have changed a lot over the last few days, but Rose said he did not expect much of a difference from Thursday afternoon’s latest forecast.

“There’s always a possibility it could change. I wouldn’t expect to see a big change at this point,” Rose said. “You’re already in an advisory. We’re already forecasting snow in the area.”

The National Weather Service is not expecting any travel issues in Selma and Dallas County because the temperature will not be below freezing.

“The roads will pretty much stay wet,” Rose said. “There may be some little slush areas on bridges and overpasses, but we’re not expecting any serious road issues.”

Precipitation is expected to move out Friday night.

Rose said the low Friday night will be 28 degrees.

Toya Stiles, director of the Dallas County Emergency Management Agency, said she would be playing close attention to the weather throughout the night. She said the county’s road crew is on standby in case road conditions do get bad.

“We have our road crew on standby,” Stiles said.

“If the road crew is needed they will go out and sand some of the bridges and roads that ice over, but we’re not expecting any ice accumulation.”

As of Thursday night, Selma City Schools and Dallas County Schools both planned to be in session.

Superintendents Dr. Avis Williams and Hattie Shelton said they were keeping a close eye on the weather, and any decision to close school would happen in the early morning hours.